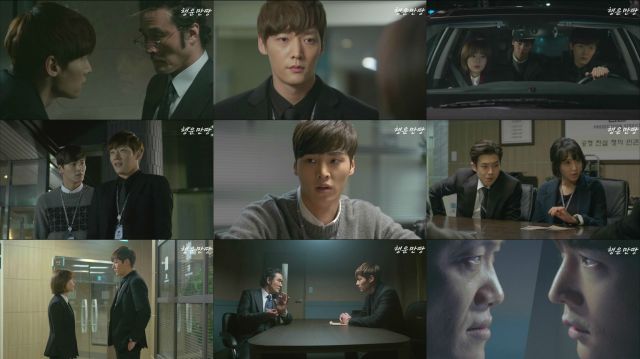 And just like that, it's over. There was, in fact, a very good reason why Hee-man spent most of the last episode off camera. While it's gratifying to know that the bad guys aren't the only ones who uses heavy misdirection to manipulate the situation into their favor, at the same time it's a little aggravating realizing that a lot of the confusion in the story lately was in fact the result of screenwriting tricks designed to prevent too much information from becoming too obvious too quickly.

Weirdly, "Pride and Prejudice" actually kind of suffers from the script being a little too good. It takes a great deal of skill to weave a story this intricate and complicated- but it also requires an exceptionally high grasp pf language. In this case the language is Korean, and if you're here, that probably means you've been watching the drama with English subs. For all its positives, "Pride and Prejudice" is not the most friendly drama to the translated format.

Regardless, the emotional moments still have obvious punch. Yeol-moo gets two big confrontations here. In the first case particularly, she's verbalizing a strong yet formal complaint against the system that has made the entire investigation such an impossible mess of politics and corruption. It's here that Baek Jin-hee really shines as a perspective character. While Yeol-moo is literally only speaking for herself, there's the obvious implication that the same set of tortured events could have happened to anyone else as well.

At the conclusion of it all, there's less a sense of excitement as just relief. The trio of main characters just shuffles back home to another day of normal life, and this too does a lot to underscore the humanity of the drama's general premise. Nobody here is in the game to score career points or anything like that. They're just looking for a fair, just world, and are trying to do their best to insure that much for the future.

So what's left for the drama to do..? Well, Dong-chi discovers a rather alarming inconsistency. Not with the overall kidnapping case, but rather with a secondary event to all that which no one has put much thought into until now because it wasn't relevant to the fate of Yeol-moo's brother. It's a disconcerting direction for the story to take- however, we at least seem to be out of the woods when it comes to the elaborate mind games, so hopefully the extended epilogue for "Pride and Prejudice" will take on a more reflective hue.