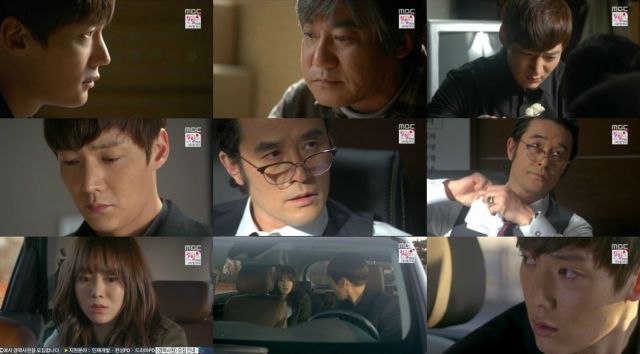 Technically the story is in an epilogue phase right now. The main culprit has been apprehended. The lingering question is about the unaddressed coincidences. I appreciate that the characters in "Pride and Prejudice" aren't just taking a victory lap, even if that's obviously what Yeol-moo wants to do. The conspiracy to date has already been so outrageously complicated that it's hard to imagine the entire sequence of events could be unraveled so easily and so quickly.

For that matter, even though the drama appears to have established once and for all that Hee-man isn't really a bad guy, there are still all sorts of ominous hints about his long term political motivations. Even as this case is dying none of the characters can really escape the fact that they work in an extremely adversarial job where personal relationships are just as important as competence in determining who does what where.

This makes for on particularly interesting character dynamic. On the one hand Dong-chi's reasonably sure that either he or someone very close to him directly facilitated the past tragedy (or tragedies) somehow. Now, contrast his obvious sense of guilt over the past case with his sense of justice in the current ongoing case, where Dong-chi has to fight for a rescue of one of the minor characters unfortunate enough to get swept up in one of the major messes.

It's fascinating at times how, even in the most triumphant moments, "Pride and Prejudice" seems determined to remind us that law enforcement isn't friendly, not even necessarily to other members of law enforcement. Take all of this in the context of Dong-chi, and consider whether this was how Hee-man got to where he is. It's easy to act the hero until, inevitably, a mistake is made. Can we really justify taking Dong-chi out of the game when he's at least trying to his best, while others are more unrepentant?

So, is that how everything got so badly entangled? In terms of setting "Pride and Prejudice" has actually made very good use of its young cast. They're so young they haven't had the chance to get their hands dirty. They still have some idealism left over. But the drama appears to suggesting here that it's this precise lack of experience which, while enabling their ability to fight injustice, limits their capacity to understand why abuse of power exists. It's some pretty complicated stuff.