The final episode changes genres somewhat, as almost the entirity of the runtime takes place in a courtroom. This shouldn't be that surprising, really, given that the characters are all prosecutors, but the shift is a somewhat odd one. Technically the trial is just a rehash of information that we already know. Even the final twist that helps the team take down the bad guys once and for all has been pretty obviously and clearly foreshadowed, though it's never actually stated outright until the final showdown. 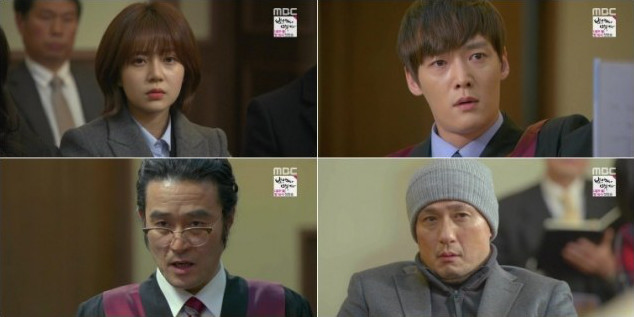 Those of you who have been watching "Pride and Prejudice" for the romance may be a bit disappointed here. Personally, I've always found that element of the drama to have such a low focus as to barely even warrant mentioning- for about as long as I can remember about this point the love story has always been a side plot to the investigation, and with the way this drama plays around with continuity, it's nice to finally have the full sequence of events laid out in clear chronological order.

There's not much of an epilogue. We very briefly get to see what two characters are doing some three years after the trial. In short, life has moved on from this big case and they've both maintained a solid focus on their careers. That's nice. Probably not the huge dramatic shift one might expect from the final episode, but that's really part of the point. They've finally lifted this huge weight off of their shoulders and can focus now on doing better.

I'm probably underselling the episode a bit- this is standard, effective high level courtroom drama. The difference with more standard versions of the genre is that we've spent twenty episodes building up to this point rather than one or two, or half. There are very few theatrics here. The whole point of the build-up was to allow the characters to make a dry recitation with no real surprises. Maturity and competence in our legal professionals, right to the end.

Really, there's not much more to say about "Pride and Prejudice" that hasn't already been said. This has been a strong, workmanlike series with a very serious critical eye to abuses of power that doesn't pretend like the battle is won just because the personal antagonist of Yeol-moo and Dong-chi have been brought to justice. I just hope that's the part of this drama that's been interesting you as well, because otherwise this finale will probably come off as unsatisfying.