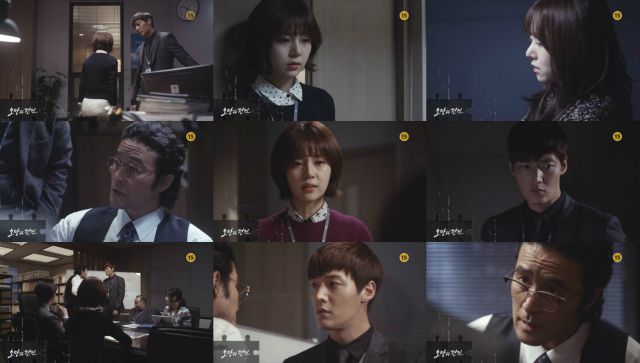 I'm appreciating the odd home life of the investigators more and more lately. These characters have a very stressful job, not so much because they're dealing with criminals, but because they're constantly forced to stop and admit that there aren't really any more obvious clues at the moment. Coming from that circumstance, it's really nice to be able to come home and just do normal human interaction stuff for awhile. Talking to a kid, for example, is fun, even if I'm increasingly unsure that the kid should even be there.

Then it's back to the grind. And weirdly, there's about as much emphasis here on cleaning up paperwork as there is on actually investigating the case. "Pride and Prejudice" continues to insist on imbibing a certain level of awkward realism into the proceedings. It's reminiscent of "Incomplete Life", of all things- and it's a perspective I can appreciate. I've got an unusual interesting-sounding job too, and believe me, it's a lot more mundane than you probably think.

The obstacles the short-term mystery runs into here are reasonably interesting, too. We finally get an extended look back at the event that either provoked the suicide or the murder, and I really enjoy the approach director Kim Jim-min-I takes toward the mise-in-scène for these portions. For the most part they're just haunting flashbacks with very sharp, very immediate tension. Then we have to get back to the present, where the investigators are forced by circumstance to work slow.

All of these elements appear to be working up ominously to the long-term plot. Hee-man's position in the story is getting harder to parse. At times it seems like he's being tough but fair, while at other moments the man appears to be involved in something deeper and more ominous. An unsettling revelation on the part of Dong-chi only serves to emphasize this, even as the goofy upbeat tone of Hee-man's cell phone firmly keeps "Pride and Prejudice" in a reality where the difference between good and evil is difficult to assess by eyeballing alone.

"Pride and Prejudice" is frequently at its best when it's simply focusing on creating a believable atmosphere. It does a lot to ameliorate the problems created by a slow, and at times unconvincing storyline progression, because it creates a nice sense of build-up. Dong-chi, at least, is preparing for an inevitable tough confrontation. Even if it's Yael-moo's fight too, this is a process that needs to be approached deliberately or everything's just going to fall apart.