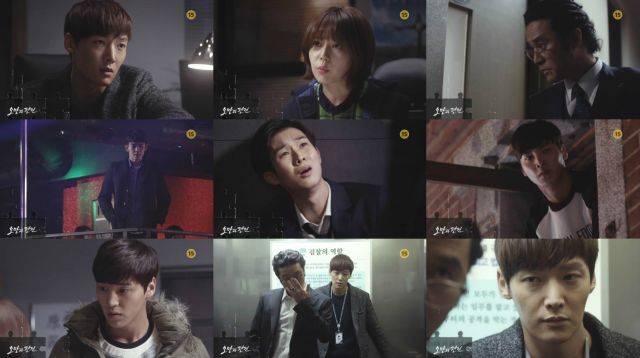 This episode is a look at what the investigators do in their off-hours when work is obviously on their mind. For Yeol-moo and Dong-chi this is, unsurprisingly, to go over in minute detail all the information they have regarding what happened to Yeol-moo's brother. Other characters actually let loose a little, and surprisingly enough, it's the ones that are having fun who end up causing the mess that no one's sure what to deal with.

The Yeol-moo / Dong-chi part of the story is leading up to the surprise revelation at the end. It's a different kind of detective work than we've seen so far- rather than trying to use evidence, they simply play information and logical constructs off of each other to try and paint a more complete picture of the case. For the most part, no actual evidence even exists anymore, so all they have to rely on is induction. This is particularly important since technically the investigation must be conducted in secret.

Elsewhere the script mostly relies on contrived coincidences...or does it? Given how much emphasis "Pride and Prejudice" has placed on logic so far, it seems quite likely that there are more complex explanations at play for what's transpired in the various plotlines than what has so far been let on. Yeol-moo and Dong-chi are completely incapable of parsing motive, for example, and this is probably the lynchpin of the case.

As for the other characters, well, what much is there to say about how they make a really boneheaded mistake? Increasingly we're seeing the investigators at a crossroads with management. It's really important that they keep this information a secret, but if not for the fact that the heads of the office have been implicated in some serious crimes, I wouldn't at all be sure which characters we're supposed to side with.

Overall I'm still not quite sure what to think about the current storyline trajectory of "Pride and Prejudice". This episode, like most of them, does manage to have one genuinely effective emotional scene. However, spaced out as they are to bookend mostly dry investigative portions, there hasn't been too much lately to really make the viewer stand up and devote full attention to the proceedings. Patience has increasingly become the most important factor in terms of watching this drama. Not necessarily a bad thing, but dramas have burned viewers on that point before. All there is to do is wait and see.