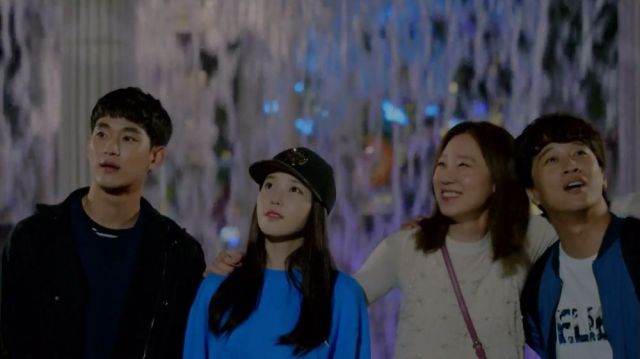 "Producers" was a big gamble when it was announced, combining a very popular cast with a new format, new thematic approach and an unpopular new timeslot. The worries that it would succumb to the fame of its cast and change its course were there, but that it would do so after only two episodes was something which shocked many. What started as a variety drama ended up a romantic comedy. The question is, did it end up a good one?

"Producers" is about the interpersonal and work relationships of four individuals working in variety show production. Baek Seung-chan (Kim Soo-hyun), Ra Joon-mo (Cha Tae-hyun) and Tak Ye-jin (Gong Hyo-jin) are living in the same neighborhood while the two men and Cindy (IU) end up working together. The four try to juggle work and the relationships and love lines between them while being in a close working and living environment. If that premise sounds odd and contradicts what you might read in official pages, your explanation lies in the creative decisions by the team. So one thing has to be made clear: this is not the workplace series you are looking for. This is a rom-com and a slightly less fairytale style one. A more realistic and casual approach. For those who miss this rarity in Dramaland, this is great. The series has fun characters, which it develops well and has chosen good actors for, it has great relationships, there is friendship and camaraderie.

While it turns the workplace into the backdrop for the interpersonal relationships, the series does put effort into what it becomes. The tropes often found in such dramas are mostly missing. This makes the romance- and friendship- based plot progress without unnecessary interruptions, convoluted subplots and stalling tactics. It is a very light and very pleasant series with characters who feel human and flawed and most of all, do not adhere to industry or genre stereotypes. As a romantic comedy about its four characters, this is fresh and entertaining.

As skillfully as the creators try to achieve this transition between the two types of focus, however, the shift in an entire work's goal can only leave traces behind. The drama changes radically and it shows. For one, the work-related events and actual variety filming dwindle out of existence as the drama progresses and it is noticeable. Characters who belong in the workplace are featured less and less and their appearances mostly feel forced and random. Trying to sweep an entirely different show under the rug would have been impossible without such inconsistencies. Furthermore, the creators' effort to maintain certain elements, but refusal to address their issues serves as a constant reminder of their decision. An example is the mockumentary concept. In an almost mirroring fashion of the actual show, the in-series documentary starts becoming more about the romance than work. Since there is an actual crew making it, the randomness of the times, places and things said is unrealistic. Perhaps this is self-deprecating humor, but it is not funny when the creators abandoned their original promises for ratings.

"Producers" is a sad reminder of how little this industry cares about concept integrity and how little devotion it has in really trying new things. At the same time, it becomes a really nice romance drama with fun characters. Broken promises aside, "Producers" is well worth one's time. That is, as long as they do not expect 400-year-old alien levels of dramatic love.