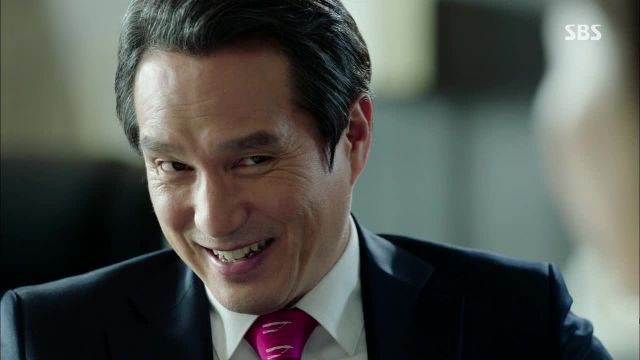 The waters are rushing quicker as "Punch - Drama" moves along. People are getting caught up in the churning depths of corruption and it doesn't matter how hard they struggle because they cannot extricate themselves from the dangerous river.

Minister Yoon is the best example of being in far above her head . She joined hands with Tae-joon and thought she had matters under control. But Tae-joon has been a master of corruption for years, and his clever wiles are too much for her. There are so many moments in this episode where she can barely contain her horror at what she has gotten herself into - a dizzying downward spiral into the darkest reaches of politics. She climbed into bed with the wrong person. The twisted relationship between Yoon and Tae-joon is one that could end up playing out in many ways, and I'm enjoying the guessing game.

"Punch - Drama" is making use of how corruption works and how it magnifies. Like Jung-hwan, Tae-joon's right hand man Kang-jae has a family he wishes to protect. Like Jung-hwan, Kang-jae has given his body and soul to Tae-joon. The parallels between them men are frightening, and still, when Kang-jae chooses Tae-joon over his family, it is a shocking decision. This has to do with how well the characters are drawn out, developed, and put in tricky situation. The piecework is as finely planned as the colors in a Titian. For example, Jung-hwan's and Kang-jae's offices are very close to one another. To take the few steps from one into another in order to speak in person would be simple, but the production team chooses to have them speak on cell phones, staring at each other from the glass confines of their offices. It's incredibly powerful.

Then we have Jung-hwan, the dying man, who seems to have learned nothing about honest dealing. But he has. He is beginning to see the mess that Ha-kyeong strives so hard to clean up; how Tae-joon poisoned Minister Yoon by taking advantage of her weaknesses just as Jung-hwan himself has done to countless people. How people like him sink their tentacles into pure intentions and twist them. We also see that he truly regrets his decisions. During his retrograde hallucinations we see that he yearns for his family to be as one again. Thus far the hallucinations are but momentary, but they have as much impact as a longer scene.

There is also his relationship with Ye-rin, his warm-hearted daughter, who really fills out the story with heart and heavy emotion. She brings out a light in him that makes his decision to give up everything, his life and freedom, to give her everything in life. "Punch - Drama really maximizes the small moments, and that's what makes it worth watching.