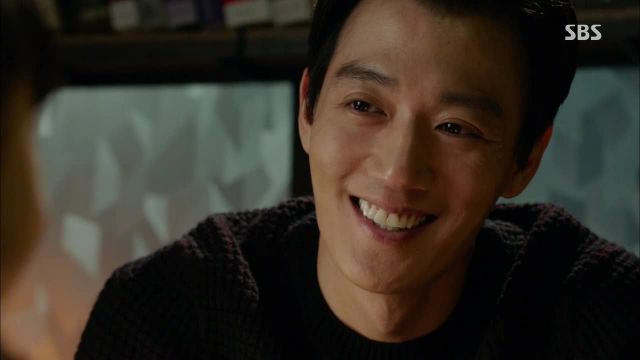 Temptation truly has reached into the hearts of the most well-intentioned and morphed them into the people they've always dreaded they'd become - people like Lee Tae-joon. Minister Yoon has been eaten alive by greed and has been spit out as yet another self-serving political monster who masks her greed and twisted soul with pretty words of doing right by her people.

This is the path that Tae-joon followed. Ha-kyeong's friend, Ho-seong, follows Minister Yoon like Jung-hwan followed Tae-joon. When greed is allowed to rule, it twists people into the same mold. "Punch - Drama" does well with these mirroring situations. What makes Jung-hwan a great character is that he is breaking from his mold, which is much more difficult than falling into it. The juxtaposition of Jung-hwan's transformation with Yoon's is striking, especially as the drama contrasts each present decision with flashbacks of opposing decisions from their pasts.

Visual and audio flashbacks are handled very well in this drama. They aren't overly long and they function as succinct informational or emotional reminders and connections to events in the past. Too many dramas overuse flashbacks and allow them to play for too long. In these cases, the passage of time is the goal. But not in "Punch - Drama". The directorial process is clear and careful.

This episode focused on the transformations of Minister Yoon and Tae-joon. Ha-kyeong was strangely absent for much of it, but in her stead the sick, symbiotic relationship between Yoon and Tae-joon grew even more dependent. Actor Cho Jae-hyun stood out as a Tae-joon who will do anything to scramble back to the top. Jo is a multi-layered actor who could show both subservience to the currently more powerful Yoon while, at the same time, seething beneath the surface, waiting for his opportunity to strike out and regain his position at the top of the power pyramid. Minister Yoon tasted the power that Tae-joon has chased his whole life, and began to follow in his footsteps, using her former intentions to shield her very guilty conscience from her need to keep her power. Her greed is connected to Tae-joon. The further he falls, the more she wants to hover over him. It's a great character pairing.

Meanwhile, Jung-hwan is slowly cleaning himself up and cleaning the world around him up for those he will leave behind. His scenes with his daughter inspire us to believe in him and trust that he will do right by her. What makes his relationship with his daughter and his family so potent is the fact that he both spends beautiful moments with them while also planning for his demise. The director does a wonderful job of placing reminders of the end to come in the happiest moments, and vice versa, so that happiness and sadness are inextricably linked.

I love this show.