The poison of greed spreads and corrupts more good people. Those who were once friends cannot be trusted any longer and it is time to turn back to family: Jung-hwan and Ha-kyeong turn towards each other in order to protect their own.

Minister Yoon and Tae-joon are not above using Jung-hwan and Ha-gyeon's daughter, Ye-rin, as a means to their end. Ye-rin is the single most important person to the dying Jung-hwan and she is who he has tried hardest to protect. To have her exposed so maliciously is the worst thing to happen to him, and also the best thing the show has done in a series of well-played scenes and decisions. The build up to the moment when Jung-hwan discovers that his enemies have used his daughter took many episodes of planning, playing tensions, and orchestrating loyalty shifts. This wasn't a sudden occurrence, but rather built through the foresight of the production team. 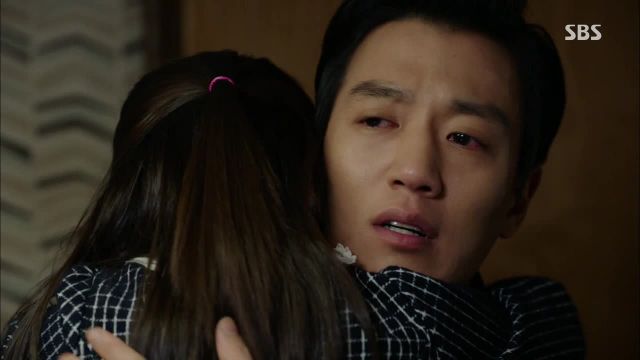 One of the strongest building blocks of the emotional impact of hurting Ye-rin is how close she is with her father. The scenes where they sing each other to sleep, or when she sobs her heart out begging him not to die, or when she encourages him, are priceless minutes that build the very foundation of the show: the heart. Little Kim Ji-yeong who plays Ye-rin is already a formidable actress. She has a tender connection with Kim Rae-won who plays her father. She can perform solo in scenes without the energy of an older, more experienced actor to guide her.

With Ye-rin made a target, Jung-hwan and Ha-gyeong pull together to fight those who were corrupted, including Ha-gyeong's childhood friend, Ho-seong. Temptation and greed twists and pulls at people who once were able to think of others and turns them into narcissists. Minister Yoon completely cracks and turns as black of heart as Tae-joon, again using good intentions as her excuse for changing. Ho-seong sees this, and then replicates her transformation when Yoon's hubris, greed, causes her to fall. He can no longer follow her so he switches to aiding Tae-joon, giving up his friendship and his morality. He is the one who offers Ye-rin to Tae-joon as the sacrificial lamb.

This episode also highlights how well "Punch - Drama" keeps steam behind the storyline. The punches never stop coming. Jung-hwan gets the upper hand, then Tae-joon. They exchange blows, searching for weak spots, and using other people as weapons. As time passes, however, Jung-hwan is less willing to sacrifice people as he once was. Tae-joon, on the other hand, is perfectly willing to do whatever it takes to triumph. And he has time on his side. This is one cancer drama that uses the time until the main character's death extremely well. I do wish a few more of the physical manifestation would make itself known because someone as sick as Jung-hwan would most definitely show it by this point.

I've mentioned this before, but the parallels "Punch - Drama" draws are, well, unparalleled. It uses metaphors and symbolism without overdoing them. Food is a particularly strong metaphor for loyalty and betrayal. Tae-joon's behavior has been likened to that of a beaten dog when Yoon held his leash in her hands. Once he breaks free, he bites her and she crashes. He remains vicious as he chases after Jung-hwan. The repeated dialogue is also a potent reminder of the past. "Punch - Drama" delivers the repeated dialogue in the same physical location, which heightens the impact.

Onto the next action packed episode!