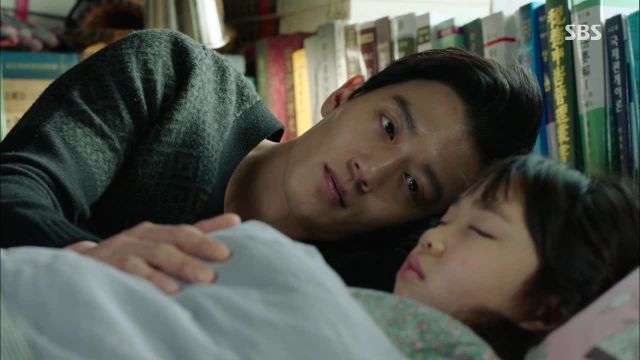 The timeline in "Punch - Drama" is very literal. It isn't a marked calendar day when things are due. It is Jung-hwan's death, the most final of deadlines, and it's coming soon. Before he dies, he and Ha-kyeong have things to do, but their enemies know this as well.

Jung-hwan's impending demise has not only changed him, but everyone around him. Some pity him. Some abuse the fact that he will be gone. A select few have grown to know him better and love him better. Those include his few allies: Ha-kyeong, his daughter Ye-rin, his devoted mother, and his secret ally Yeon-jin. Although his allies have become much fewer in number, those who remain are the heart and soul of "Punch - Drama". Short scenes between Jung-hwan and his mother, or Ye-rin, or Ha-gyeong are all it takes to lay the emotional groundwork for each episode that is then built upon by the intense political and moral battles.

I mentioned this last review, but the way that the illness has changed Jung-hwan and Ha-kyeong so that they resemble each other more with time is brilliant. They both struggle against change: she too morally rigid; he too loose. But as they work together, they find a way to satisfy their personal needs as well as grow in their ability to understand each other. She can see that the black and white view she has of the law and the world doesn't function in a morally fluid society. He can see that doing wrong always comes back to haunt him, and through him, his family. Together they grow together. It's been fifteen episodes in coming and they've suffered severe growing pains, but the point they have reached in their relationship and their personal growth is amazingly satisfying.

In a similar fashion, Minister Yoon and Tae-joon become more alike. While they are the villains, the parallels in the writing between their relationship and Jung-hwan and Ha-kyeong's are exquisite. As Yoon falls further into corruption, it is Tae-joon who hesitates. He ultimate always does wrong, but it's that hesitation that fleshes out his character even more. The writing and planning in this show is so strong. My only criticism is the lack of focus on the physical toll it has taken on Jung-hwan. He shows a few signs of his demise, but with two or three weeks left, I'd imagine he'd be sicker than he is. But this is a little quibble with a show that is nearly flawless. Why? It plays with tension like a toy, writes characters who have depth no matter how small their roles, the pacing of the plot and timing of reveals are well-planned. It focuses on the little things: food symbolism, objects that hold meaning, flashbacks. The direction is clean and doesn't try to get fancy, letting the writing take the fore. A drama just like I like it.