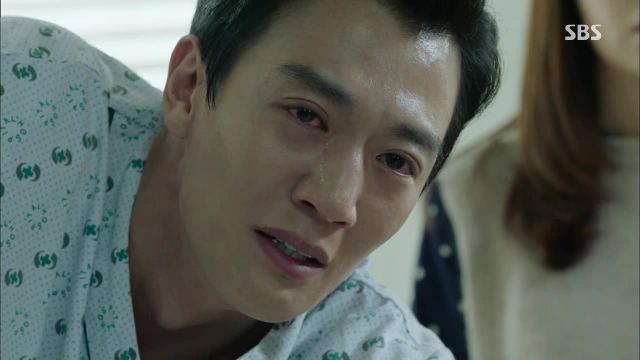 This drama is so good. The penultimate episode is upon us and I'm still gripping my arm rests. Jung-hwan's illness has almost gotten the best of him and former Minister Yoon has almost won. Almost - not quite. We still have one more episode to see who actually comes out on top. Even more than that though, Tae-joon and Jung-hwan have joined hands for one final ride up the glass elevator.

The Tae-joon and Jung-hwan pairing, whether it be as partners or opposites, is such a rich match. Both men hold a deep respect and caring for each other, no matter how they play on the field. At the start they are friends, then wicked enemies, and now, allies. Their relationship has changed with all that has passed, but they still retain that initial bond. While Tae-joon is a despicable human being, he is still human and he's a character that has been easy to empathize with despite everything that he has done. Jung-hwan has grown immensely and now it is impossible not to root for them. Put these men back together, and that's what I call a smart writing decision. They are a power team. The ride up the glass elevator that is a sad echo of Tae-joon's first glorious ride up to his office is a brilliant move, one of many in "Punch - Drama".

Former Minister Yoon and Ho-seong are completely twisted characters. They have chosen one goal and labeled it as "good" and have done all kinds of evil in order to attain it, filing those evils under the "good" category. After they attain this goal, which is taking down Tae-joon, then they will do no more wrong. It's a twisted sense of duty and righteousness, a trap, that they've fallen into. Ha-kyeong almost fell into the same, but she remained true to herself and to her values despite being turned upon by Yoon and Ho-seong in the cruelest of ways: they are willing to risk her life to attain their definition of "good" and "right".

Jung-hwan has taken the opposite journey. He started without taking any responsibility for his actions. He knew they were wrong, but did not hold himself accountable, which was the only thing Ha-kyeong wanted him to do. He has fought the battle with Tae-joon and Yoon, fought his cancer, fought to love his family as hard as he can for as long as he can. It gave him a deep sense of right and wrong, and of responsibility. He sees his role and accepts it. He does right by his family, and by Ha-kyeong. As she lays in the hospital at Yoon's hand, he goes to see her. She has always gone to him; now he reciprocates the gesture. "Punch - Drama" never takes reciprocated gestures lightly. It plans them, plants them, and enacts them with clear intentions - and do those gestures have power when they're played out.

There is one more episode to go and I have to say I'm sad to let this drama go. It's been an action-packed ride that can easily be called one of the strongest dramas this year.