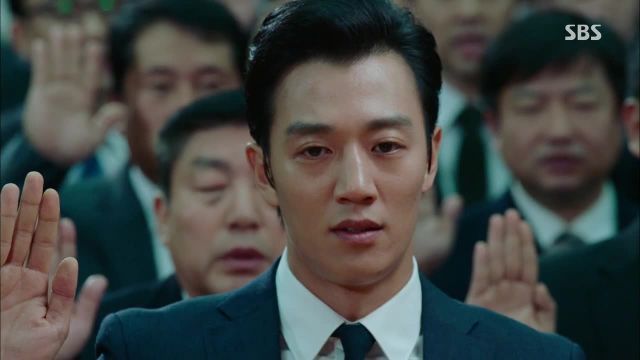 "Punch - Drama" is action-packed every second of the way. Jung-hwan doesn't react the way most terminal patients would in any drama or real life situation, which is was makes him a riveting character. The other characters feel just as tangible as he does despite their very selfishly driven, partially hidden and vaguely motivated agendas.

What is beautiful about this show is the way the past, present and future are linked by small, everyday things as well as the larger events of the show. Jung-hwan has suffered through the kind of death he himself will most likely cause his loved ones because his father died of the same brain tumor. Throughout the episode he catches glimpses of what it will be like for his younger sister, his mother, Ha-kyung, and his little girl. Each realization hits him and yet he still continues on his corrupted path of aiding crooked Tae-joon. There is also a rather poignant moment where his career-rival, Kang-jae, takes advantage of Jung-hwan's illness to further his career, a nasty, cruel move that Jung-hwan would've made as well had their roles been reversed. It points out that our "hero" is not a good man. Up until the last seconds of the episode he continues to deliberately choose to deceive Ha-kyung and do morally wrong. In the present, he is not a good man because of the choices he very consciously makes. That's powerful stuff. He isn't forced to do them - he chooses to do them up until the moment of the surgery he is betting on to save his life.

When he researched the surgeons who could remove the deadly tumor, he sat in his room that spoke of his entire past, the past where he made the right choices, won over Ha-kyung, and lived with his family. The contrast of past and present is startling and exactly what motivates me to watch and see what he will do with the last six months of his life. Even the build up to his acceptance of the tumor was a journey. Walking through a single day has many, many references to a future he now will no longer see. And still, Jung-hwan's ambition drives him past these realizations. That is, until he speaks to Tae-joon about his tumor. It is the first time Jung-hwan gives into his feelings and cries despite the many powerful inducements to do so. There is a strong father/son-type bond between the two men and something that keeps Jung-hwan inexplicably tied to the very corrupt Tae-joon's side. These are not evil men. They are men who can see what is wrong and still choose to do it. That is powerful. We are so used to see people forced into situations in dramas or who are innately evil. "Punch - Drama", despite being a legal drama, is very much about introspection.

The production of this show is as clever as the writing and as strong as the acting. The clarity of picture is sharp, there are no wasted, or overwrought angles. Camera-movement is well-timed with a cleverly written background music score that resembles film music in its distinct ability to mirror and cause emotion. There is some wonderful staging, such as when Tae-joon ascended the glass elevator to his new office and he (and Jung-hwan) looked down as hundreds of South Korean prosecutors bowed to him as he rose, seemingly into the heavens. A very clever, and powerful moment.