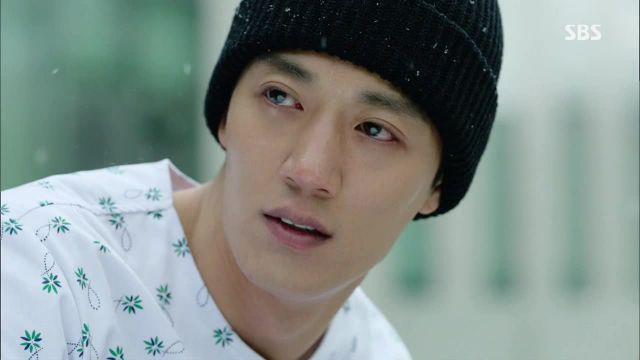 All those years Jung-hwan walked the wrong path have finally come to an end. Kim Rae-won made every second Jung-hwan was on screen electrifying. Jung-hwan has always been a deliberate man so when he takes the entire episode's length to decide his course of action, the outcome is profoundly deep and powerful.

In the end, it is Ha-kyeong who gets to him. Just before he went into surgery he chose to defend the corrupt Tae-joon. When Ha-kyeong faces a prison sentence, she still chooses the right path and refuses to bury someone else to free herself. It is this type of decision she has been waiting seven years for him to make, and finally he does. It's such a satisfying turn around because Jung-hwan's ambition is strong enough to make him literally hang himself out a window thirty stories up to get what he wants. For him to change directions is a powerhouse change and the build-up to it was pitch perfect.

Part of the buildup has been bonding with his daughter, Ye-rin, and her youthful, adorable woes and worries. He watches her fret over her mother and realizes how much he has missed in her life. He promises to be the person who makes her wishes come true. He's finally seeing his kid. And that's something she will take with her for the rest of her life, no matter how long this changed Jung-hwan is in it. The two actors, Kim Rae-won and little Kim Ji-young-III, have a wonderful chemistry that make them believable as father and daughter.

Another part of the buildup is the relief Tae-joon feels that Jung-hwan is going to live and how that juxtaposes with what Jung-hwan's presence means. The two men really do love each other, but Tae-joon isn't willing to sacrifice his dream for loyalty - it is what truly connected him, Jung-hwan, and Kang-jae. Tae-joon is who Jung-hwan would've become. Tae-joon would cut out the half of his heart where Jung-hwan lives to achieve his political dreams, and he does. Cho Jae-hyun is magnificent in his portrayal of the corrupt Tae-joon and how he fights his feelings for Jung-hwan. When two close people become enemies, it is an even more powerful fight than had they been strangers. I anticipate this will be one cruel, drawn-out, and bloody fight between the former friends, colleagues, and brothers.

Then there are the bigwigs who are currently at battle, Minister Yoon and Tae-joon as the Prosecutor General. They hate each other. Yoon prides herself at being upright. When she she plays the game Tae-joon's way, he catches her. It's inevitable, but still a great moment. The moments are what "Punch - Drama" does best. It builds up and culminates in the most wonderful climaxes. When Minister Yoon is in trouble, that is when Jung-hwan decides to do the right thing and go against the man he sold his soul to help and protect. Or when Tae-joon eats a bowl of takeout from Jung-hwan's favorite place. Or when Jung-hwan thinks about small everyday talk that will never come to pass. These are well-planned, quick, but very important little moments that add to the richness of "Punch - Drama".

Jung-hwan has taken a step towards becoming a hero. He has declared war on his long-time friend and all we have to do is grip our seats and watch him spend his last days fighting for his family, and for what is right.