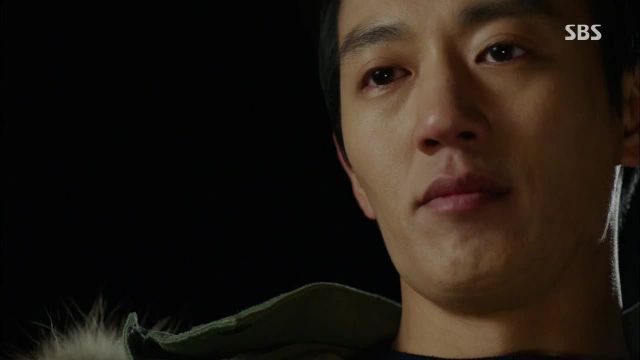 "Punch - Drama" has made me love being wrong. I thought Jung-hwan had changed for good. Nope. He has just changed sides, but uses the same ol' dirty tricks, doing the right thing the wrong way. His daughter motivated the initial change, but it will be up to Ha-kyeong to remind him that he once had a conscience. And that, my friends, is real intrigue.

What I love about "Punch - Drama" is the set up. It has several plot threads running at the same time at very similar paces and in varying phases of development. This keeps the tension high and the mystery nearly constant. The director knows when push and pull on the momentum of any single thread and is a master of setting up profound moments. There is a particular moment worth mentioning: when Jung-hwan and Tae-joon do silent battle in different rooms of their office building while eating jajangmyeon. It's absolutely a fabulous scene pregnant with tension, fraught with meaning, and frustatingly, brilliantly, left unresolved.

Then we have Jung-hwan, both vulnerable and tough as nails. He purposefully gave up his tender side, but it comes to haunt him as he slowly realizes he doesn't have a very long future with his daughter, or with his family, or to realize his dreams. Ye-rin brings out the Jung-hwan of the past that we see in flashback who is full of hope, believes in doing right by himself and others, cares for his family. Only with his daughter is he emotionally unfettered. I have a feeling it will be Ye-rin who brings down the wall and helps to bridge the gap between her parents. Her genuine caring and youthful innocence make her a wonderful connection, not only between parents, but between the drama and the audience.

Ha-kyeong wants him to live right despite the hefty cost that she must pay. Jung-hwan is the kind of man who Minister Yoon looks to in order to learn how to play dirty - that is not the kind of man Ha-kyeong wants him to me. Inasmuch as they are fighting corruption in the world, they are also fighting Jung-hwan's corrupted soul. She will teach him that the ending isn't the most important - it's how he gets there. That's so cool.

What is also cool is how Tae-joon becomes a reluctant, but extremely dangerous, adversary. The cleverness of the writing is that is is the love Tae-joon feels for his junior Jung-hwan that gives him a sharper edge. It was Tae-joon who helped turn Jung-hwan into the fearsome, seemingly soulless prosecutor he is today. They know each other well, which makes me anticipate the battle between them.

One wonderful tool the show employs is the repetition of certain words or phrases. Said once, it has a certain connotation. Said again, it becomes a powerful threat or warning. This isn't often used, so when the writer chooses to use it in the dialogue, it punches in the gut. Pun intended.