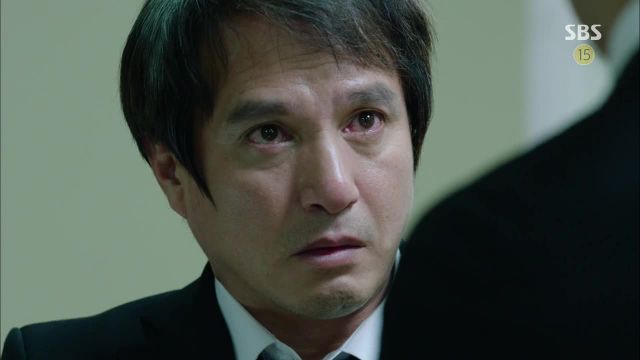 Tae-joon is the star of this episode. Cho Jae-hyun is incredibly powerful as a man who loses his brother and hardens himself against a former friend, intent on seeking his own brand of justice. Jo is magnetic, almost overwhelming, in his performance. As an actor playing a villain washed in grey, there is nothing more a viewer could ask for. Tae-joon cares deeply for his brother, his brother's family, and for retaining the memory of where he grew up. To do so, he has lied and cheated to achieve his ends. His brother's death is the catalyst that turns Tae-joon into an avenger, who seeks justice. His brand of justice is not synonymous with Ha-kyeong's brand. Tae-joon's is personal; Ha-kyeong's is of a loftier sort.

It's an intense battle between the two types of justice. Ha-kyeong's is easily colored, as can be seen by the fact that her idol, Minister Yoon, is slowly broken down by Tae-joon's willingness to do anything to accomplish justice. To Ha-kyeong, justice has to be achieved in an honest manner. Now, she is the only one who believes so. The adventure will be watching her try to persuade Jung-hwan to do the same with the end of his life.

That, and the intense anxiety I feel every time Jung-hwan has a chance to tell Ha-kyeong that he is still dying, he is in immense pain, and that he's just trying to do right by their broken family before his cancer, or Tae-joon, wipes him out. The way this dilemma has been built up has been quick, clever, a solidly constructed. After six episodes of watching Jung-hwan been cool-headed and smart, it's incredibly powerful to watch pain and panic drive him instead of his cold and calculating mind.

Another character who has become more intriguing as time passes is Minister Yoon, the high-powered woman who like to retain an image of being upstanding and pure, but who secretly harbors a few dark secrets. She is in no way as marred as Tae-joon, but even one secret can ruin a person when ruthless men like Tae-joon, and Jung-hwan, are around. As Yoon succumbs to Tae-joon's mechanizations, Ha-kyeong's eyes are forcefully opened. Her idol is show in her true colors: to be human, and not god. The spiral downward is so effective because it drags so many people down with the terrified Yoon. That, and like Jung-hwan mirrors Tae-joon, so Ha-keyong could very easily mirror Yoon.

"Punch - Drama" is effective because the silence speaks as much as the dialogue. A face shot says as much as a landscape. Decisions are well thought out and the execution of the drama is clean. It is by no means flawless, but those flaws (like how tiny the world can be) can be overlooked.