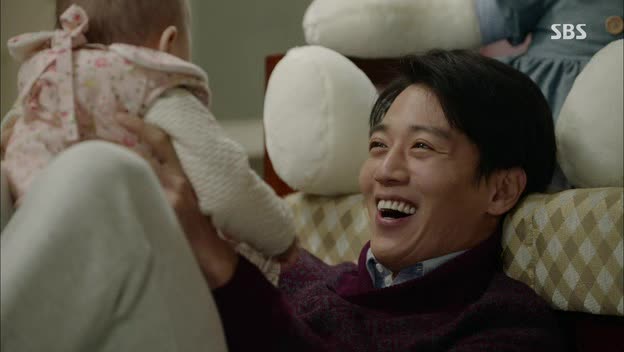 "Punch - Drama" is a drama that is constantly in a state of change. The law that once guided some of the most righteous people means little when family is at stake. People switch sides; they become crueler and harder. Jung-hwan is working to uncover truths he spent year burying in order to save his family before his time runs out.

It takes one decision to change one's path entirely. Yoon Ji-sook is the best example of this change, and like episode 7 was Tae-joon's time to shine, episode 8 shines the examining light on Yoon's latest turn down corruption lane. She has lofty goals of revamping the justice system, but those goals are twisted by the wrongdoing in her family that she shirks the law to avoid. She is the symbol of good in the justice system and Ha-kyeong's role model. Watching her crumble under Tae-joon's manipulation is both terrifying and disgusting. Ha-kyeong's eyes are opened to how quickly corruption can take over, just like Jung-hwan's cancer.

The villains in "Punch - Drama" are of all sorts. There is Minister Yoon, the once upright and good. There is Tae-joon, the forever twisted, but devoted family man. Ho-sung, Ha-kyeong's long-time friend, does wrong to achieve an overhaul of corruption that does not happen. Even Jung-hwan himself is villanous in all that he has done in the name of his ambition. "Punch - Drama" is about his last days, but also about how it is easy to become like him, about how quickly things can magnify and change from a minor wrong into a huge transgression. It is also about Jung-hwan will right those transgressions he has made in order to care for his family in the way that Ha-kyeong also dreamed: by doing the right thing. It's a lofty aspiration in the mire that the legal system has become.

Along with the legal push-and-pull that keeps this drama on its toes, this episode in particular took time to savor Jung-hwan's relationship with his daughter, which adds so much heart to all the happenings of the show. It draws him close to Ha-kyeong and may lead him to make peace with her, with his death, and with how he's lived. I want to see what memories he leaves his child with.

What "Punch - Drama" does so well besides create riveting characters and speedy, engaging storylines is the execution. This show works well with verbal silence, taking advantage of the skilled cast and clever camera storytelling. Many scenes contain no spoken words, but they say more than a monologue could ever convey. This drama also makes good use of metaphor, such as using food to emphasize a particular point. Food and dining is a central part of every culture. Eating together, sharing life's sustenance. "Punch - Drama" turns food into a keen communicative tool.

"Punch - Drama" is a race to the finish, to Jung-hwan's death. But is also about how Jung-hwan learns to live despite the fact that he doesn't have long to do it. And that is storytelling that I can get behind.