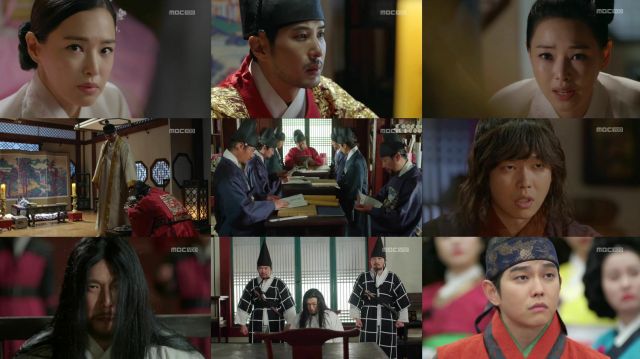 For most of the early portion of this episode I thought Amogae's unusual moments of lucidity were a signal that maybe he was ready to rejoin the main story. Alas, it turns out what's actually happening is that Amogae is being given a tragically fitting eulogy. The overall positive tone when it comes to Amogae's past accomplishments and relationships is a bit out of step considering how by the end Amogae's three children are as estranged as ever.

This is most immediately tragic in the case of Gil-hyeon (played by Shim Hee-sub) who comes very, very close to figuring out that his family isn't completely dead but inevitably fails. Gil-hyeon is, incidentally, not a character I've had much cause to discuss because in the frequently tangential schemes of "Rebel: Thief Who Stole the People" Gil-hyeon's plotting is the most tangential of them all. It's why I was rather surprised to see him actually do something here.

It was also a bit of a surprise to see Gil-dong actually use his superhuman strength for once- although in context, this didn't really seem like such a big revelation. People can be pretty strong when they're mad and remember, up until now, pretty much everyone has just seen Gil-dong as either the village idiot or the master manipulator. No one has actually seen Gil-dong in a fight, so there's no telling how strong the guy really is.

Which is, as might be expected, a problem with "Rebel: Thief Who Stole the People" as much as it is genuine characterization. It seems like every time Gil-dong even gets close to wrecking havoc on the political system some contrivance pops out of the woodwork to delay his retribution just a little longer. Let's recall that for all its focus on schemes there's actually been very little forward movement on Gil-dong's plot, or even on what Gil-dong has been doing in the background.

So while I get what the production team is trying to do here, the slow pacing of "Rebel: Thief Who Stole the People" remains the drama's constant downfall. King Yeongsangun is inching toward being the most sympathetic character, because he's at least making proactive efforts toward solving problems, imaginary though many of them may be. "Rebel: Thief Who Stole the People" is just barely clichéd enough that the characterization isn't really entertaining on its own merits- so that leaves us with the action, which with Gil-dong has been rather lacking.