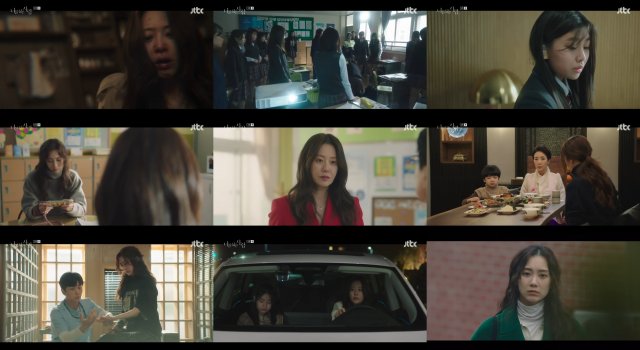 In the opening of "Reflection of You" the middle-aged artist Hee-joo (played by Go Hyun-jung) appears to kill someone and dump the body in the middle of a lake. I felt misinformed by the synopses I'd seen that made it sound like the plot would be about manners and self-actualization. Which isn't exactly wrong, it's just that the actual story instead turns out to be about the legal issues created when substitue teacher Hae-won (played by Shin Hyun-bin) physically strikes Hee-joo's daughter Ri-sa (played by Kim Su-an) on camera.

Most of "Reflection of You" is structured as a mystery. Naturally, there's the question of why Hae-won struck Ri-sa. And intrigue is only added to that question by Ri-sa's continuing hostile attitude. While Hee-joo acts like Ri-sa is just a traumatized victim, Ri-sa herself in her brief appearances just wants to get on her life, and even manages to use bratty English in the process. The degree of her indignity, compared to the rest of the family, remains unclear.

But as far as the family at large goes they aren't exactly more sympathetic. One plot point of particular alarm is how school officials initially apologize entirely for the slapping incident being caught on a viral video. Secondarily, they apologize in the belief that Hae-won did not realize Ri-sa was the daughter of Hee-joo's husband Hyeon-seong (played by Choi Won-young), the school's corporate president. Hee-joo responds, with some horror, that physical abuse isn't OK just because it happens to a not especially important student.

"Reflection of You" is fairly clearly priming us to expect that there's something sinister going on with this family, possibly even beyond the usual rich person stuff. What that could possibly be, well...I have no idea. Director Lim Hyeon-wook is pretty dedicated to slow pacing here. It's not even until the end that it's finally confirmed that Hee-joo knows Hae-won from an event in their past, a revelation that doesn't feel like much of a spoiler given that Shin Hyun-bin is the second lead.

In general the pacing is all right, and it certainly helps that the episode is only an hour long. But "Reflection of You" doesn't exactly have a powerful hook to keep a viewer engaged. At present we're just taking screenwriter Yoo Bo-ra at her word that there's an actual point to any of this. Although with her last drama being "Just Between Lovers" there's no question Yoo Bo-ra deserves that much credit.