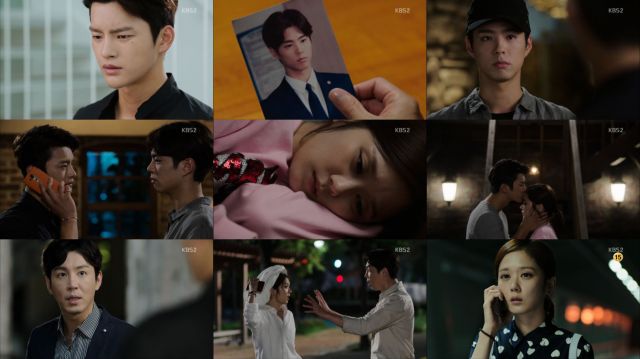 How does a man who doesn't feel react when hit with emotional discoveries? The question kind of sounds like a riddle, which makes the experience of watching this episode of "Remember You" a somewhat odd one. Watching Hyeon cry is, well, a little awkward. On one level I want to criticisize Seo In-guk's performance. But then on the other end I remember that he's been perfectly capable so far as the man with the unchanging, steel cold expression.

In broad perspective that's probably the entire point of the episode, really. Hyeon has consistently been unwilling to buckle under emotional pressure, but the discovery he makes here is just too much. I can't help but think back to his weird lack of reaction to Ji-an's kiss. Even then, and even when Ji-an has been in danger, Hyeon didn't show any signs of cracking. Yet here is the moment when Hyeon finally has to admit that he's not perfect. And the only person he can talk to about that is Ji-an.

The subtext is, as usual, pretty hard to ignore, even if it's difficult to initially find. Seon-ho's motivation as the assistant to the indisputable villain of the drama has always been rooted less in serial killer philosophy so much as it has been in Seon-ho's own understanding of the meaning of family. The apparently cynical message of "Remember You" in this regard is sharp primarily because it seems so incontestable. It's hard to see how Hyeon can patch the situation up with Seon-ho- like the man says, it's too late.

Or is it? Who has been following Hyeon around this entire time, begging for some sort of personal recognition? Who's been leaving just enough clues lying around the crime scenes that Hyeon can figure out what's been going on? The extent to which any of these motivations are conscious is, well, not even relevant. If we look at Hyeon and Seon-ho as characters who have killed off their emotions, and who are now struggling to come to term with these same emotions...

Well, I have no idea how any of that is supposed to resolve. The cliffhanger does manage to remind us that allegedly at least, "Remember You" is a crime procedural, even if it's constantly getting sidetracked into its own backstory. This is a drama that constantly offers up surprises, and give us no easy solutions. Hyeon and Seon-ho, for all their intelligence, can't resolve the problem. At this point Ji-an is the best hope for resolution, not as a plot token, but because she alone knows how to feel.