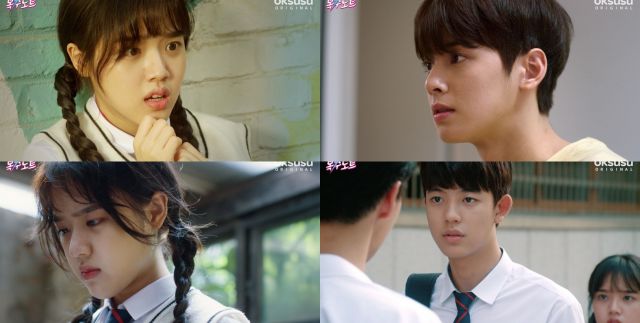 Goo-hee (played by Kim Hyang-gi) is a teenage girl just starting high school. That's pretty bad on its own, but a lot of factors are working against her. In the first place she has a horribly goofy name- because her surname is Ho, anytime anyone addresses Goo-hee by her full name, it sounds like they're calling her a loser (Hogu). Goo-hee's family is poor enough that she has to help at their fried chicken business to make ends meet. Then, just to make matters worse, Goo-hee's boyfriend breaks up with her.

These early episodes are mainly about setting up these characters. We also get Ji-hoon (played by Lomon), who's handsome and cool and helpful to Goo-hee literally while being unhelpful to her verbally. Deok-hee (played by Kim Hwan-hee) is a goofy obsessive fangirl who quickly becomes Goo-hee's only friend. Beyond that, the main characters of note are the Zombie Club, a group of bullies and mean girls who go from being catty to Goo-hee to actively tormenting her, once they discover her shocking secret.

So where does the titular "Revenge Note" come into all of this? Well, it's really just an app on a phone that allows Goo-hee to arbitrarily select people who she can take revenge on. It's kind of like the Death Note, as is implied by the title, but the better anime comparison would actually be Hellgirl, since the app is a mysterious abstract concept. To date no real rules have been explained for it. Go-hee uses it once, and is satisfied. The second time she demurs, having guessed, no doubt correctly, that it must cost her something.

But the high concept in not as widely used a plot point as I was expecting. "Revenge Note" is just a typical high school drama about typical high school topics like bullying, and as the genre goes, the material is quite tame. Yes, the bullies are mean and even frightening, but the content is quite family friendly. The humiliations Goo-hee endures are mainly social. It's just, there's this obvious fear of escalation.

Personally I welcome escalation. While "Revenge Note" definitely has its charms so much of these early episodes are just about setting up the characters we haven't actually run into a conflict yet. Still, the drama is pleasant enough that it puts me in a pretty patient mood. The teenagers don't really need complicated motivation. They're just kids after all. The "Revenge Note" itself though, that's the mystery I'm expecting is really going to be unraveled here.