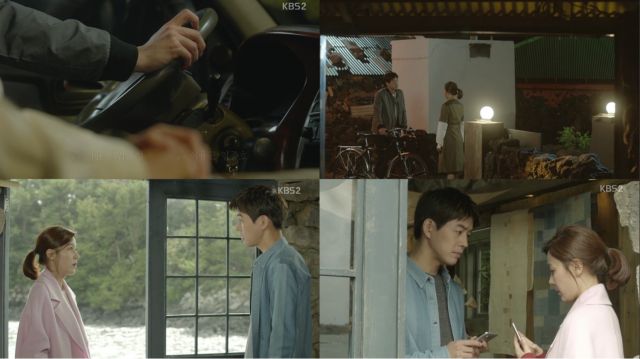 Motivation is the most ambiguous watchword at play in "Road to the Airport". On first glance it seems like Soo-ah is just ignoring her feelings. But really, what's actually going on is that Soo-ah is torn between the blatant contradiction in her wanting Do-woo while still having a basically comfortable and familiar life. Soo-ah has spent much of her adult life making a very self-conscious effort to avoid upheavel. It takes a lot of thought for her to arrive to the end of a difficult decision.

And this is of course a good thing. Even Do-woo seems to appreciate Soo-ah's reluctance well enough, because it always results in him going back and reviewing his own decisions as of late. Once again, that Soo-ah and Do-woo both came to Jeju to start over was not a coincidence. Even absent the stirrings of an emotional affair, they both wanted to escape. Their lives had been circumvented to simplistic roles, ignoring their own true desires.

Contrasting their characters with the supporting roles is rather enlightening in this regard. Jin-seok is enamored with the way things are simply because living life in that basic format appeals to him. That Jin-seok's make no sense either emotionally or logically is beside the point. He's just trying to make everything fit neatly into a complicated schedule that makes it difficult for him to do everything he wants in life. But for Jin-seok, all that is just a checklist.

Hye-won's formulations are even weirder. The more context we get of Hye-won's relationship with Annie the stranger the subtext becomes. It's bizarre to think that technically speaking Hye-won is an artist, yet is almost completely incapable of meaningful self-reflection. The worst of it is her cynical attitude is actually pretty contagious. I realized I too had been making a very unfair assumption of Do-woo this whole time, soley bceause Hye-won was making a conscious decision to show off her worst side.

As usual all these wonderful character contrasts are brought into the best possible focus by director Kim Cheol-gyoo, who keeps showing us what beautiful means from the vantage point of the individual characters. It's telling how even though Soo-ah does not make art, she nonetheless strongly appreciates art and has an excellent sense of aesthetics. It's no wonder that a woman like that ended up becoming a flight attendant- although that, like so much of life, was not what Soo-ah was expecting.

"[HanCinema's Drama Review] "Road to the Airport" Episode 12"
by HanCinema is licensed under a Creative Commons Attribution-Share Alike 3.0 Unported License.