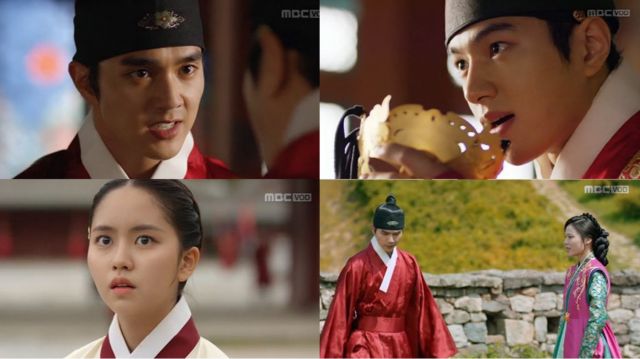 In a peculiar plot twist, it turns out that Queen Mother Joongjeon is not, in fact, completely crazy, and there was an actual coherent plan behind last episode's mass poisoning. Although even after the specifics are explained the plan still doesn't make very much sense. Why, it's almost as if the mass poisoning was a screenwriting device specifically contrived to end episode twenty-four on a shocking cliffhanger.

The preview for these two episodes was also equally misleading, and that, I think, is the main part of "Ruler: Master of the Mask" that really annoys me. All of the plot twists in this drama are a function of unnecessarily vague exposition. Nobody in the production team seems to think it's all that important to actually explain anything, even when the actual perspective characters are already aware of all this and it's only we, the viewers, who are arbitrarily kept in the dark.

It doesn't help that Prince Seon and the other Seon appear to have completely forgotten that they have a larger goal. Most of their characterization at this point is just about their romantic obsession with Ga-eun, who remains a largely passive participant in the dramatic proceedings. Ga-eun has evolved from being useless to actively obstructing any progress because the male leads spend an inordinate amount of time fighting over her instead of fighting against Dae-mok.

Hwa-goon gets a couple of scenes. Neither of them are all that good- the first one comes off as really spiteful and mean, even if strictly speaking it was probably the least explicitly harmful thing Hwa-goon could have done while still plausibly acting as Dae-mok's agent. The second is...awkward. I've been forgiving of Yoon So-hee's acting so far but yikes, that confession was just painful to watch, And just to add insult to injury, that was actually some of the better writing we've seen in "Ruler: Master of the Mask", it's just that the performance was awful.

Positive points? Well, I'm really curious where they filmed the confessional scene. It looks like a traditional fortification, but not one that I've ever seen before on account of it being unusually wide in an area without many trees. Yes, that's what it's come to. I'm at such a loss for positive things to write about "Ruler: Master of the Mask" I have to muse about the location shooting. At least someone in this drama has some idea what they're doing.