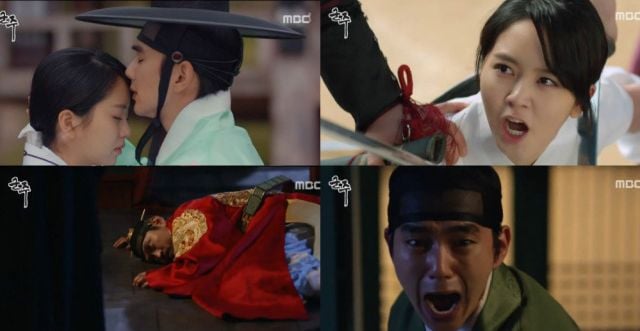 If the previous set of episodes was meant to establish the hopelessness of the general universe in "Ruler: Master of the Mask" this set seems determined to prove that King Yoon was right all along. Every new plan Prince Seon comes up with ends increasingly catastrophically. Negotiation only makes people angrier. This escalates until we hit a cliffhanger that can't possibly be topped.

That's not figurative language. I literally can't see how the next cliffhanger could possibly end on a more extreme note than this, or how Prince Seon could possibly bounce back from a situation this bad. If Dae-mok is this powerful, and willing to react this harshly to the mildest stratagem, and if Prince Yeon doesn't even have the advantage of the mask anymore...what's left exactly? Does Prince Seon have any advantages at all?

Because his allies are of no help. Ga-eun, for all her attempts to try and act defiantly and heroically, is about as good at her chosen tasks as Prince Seon is. Which is to say, not competent at all. She also has a very romantic scene with Prince Seon which I found a little strange because so far these two have mostly experienced negative crisis situations with one another. There's no positive blowback at all. They just make life worse for each other.

The other Seon is an even more aggressively useless character. He just kind of shudders in horror at the high level power players who are more than willing to brutally torture anyone they think might be an enemy. After a brief cute scene where the other Seon tries to learn about how Prince Seon moves, we're soon treated to a setpiece where none of this ends up mattering and all and indeed, were it not for Hwa-goon's machinations, Prince Seon's plan would have managed to go even worse than it did.

Ah, Hwa-goon. She remains my favorite character in "Ruler: Master of the Mask". It's telling that my first particularly negative reaction to the drama is in the context of episodes where Hwa-goon does not play a major role. It's really just a matter of how so far, Hwa-goon is the only character smart enough to have a conversation with Dae-mok that doesn't result in one or both of them becoming furiously angry. Dae-mok has proven himself to be a capable enough adversary that the gimmicks we've been seeing just aren't going to cut it.