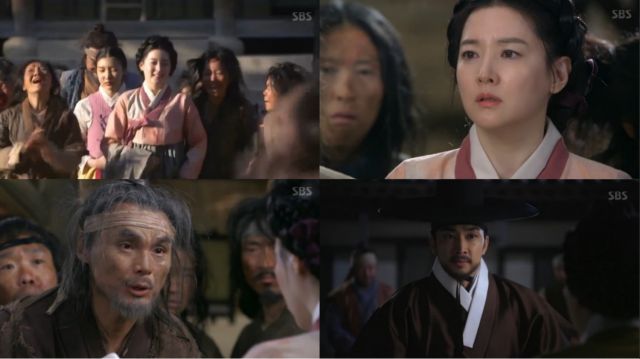 Incredible though this must sound apparently the saga of the colored paper manufacturing scheme still isn't done yet. In fact, it's actually the foundation for an international political conspiracy that ties into every ridiculous plot point "Saimdang: Light's Diary" has come up with so far. Yes, that's right, all the fires, the fight scenes, the frivolous arrests, Headmistress Choi's petty grudge against Saimdang, even Headmistress Choi's title all tie into this conspiracy somehow.

Nominally this is good writing. What's more this kind of story would be difficult to set up in the live shooting system which is often subject to last minute changes. There's just one problem. The story is really, really stupid. Saimdang ministering to poor displaced internal refugees through a colored paper production plant scheme is never going to not be ridiculous. Besides that Saimdang herself is only faintly aware of the conspiracy's existence, so there's little to nothing she can do to directly fight it.

So instead that role falls to Lee Gyum who of course addresses the bullying against his first love through the use of...martial arts. Which wasn't so excessive this episode but the next episode's preview has promised plenty more where that came from in terms of high stakes action. I don't know what offends me more- that Saimdang is being relegated to a supporting role in her own drama, or that artists, of all people, are the protagonists here.

This consistently ranks among the more perplexing design decisions of "Saimdang: Light's Diary". More and more the script isn't reading like something that has anything to do with the historical Saimdang at all. It's like writer Park Eun-ryeong had an old pilot script for a traditional historical action series that never got produced, and decided it would just be easier to adapt it to Saimdang's story than come up with something that would actually be appropriate for the concept.

Not that this is entirely her fault. While "Saimdang: Light's Diary" does occasionally manage to be slightly above average with a decent scenery shot, the fact remains that a discouragingly large amount of people must have signed off on these creative decisions. And for the life of me, I can't figre out why. Were they really that clueless about what kind of audience would be interested in Saimdang? I can stomach a good historical swashbuckler as much as anyone, but that's not what I signed on for here.