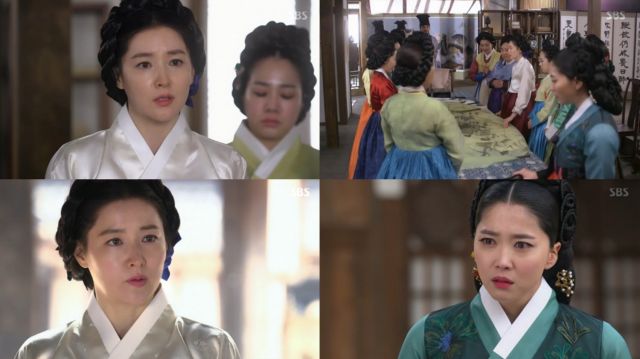 One of the factors that really accentuates the sheer badness of "Saimdang: Light's Diary" is that every so often, there is that actually genuinely good emotional scene that makes you wish the whole drama could be like that. Here, that scene is Saimdang's calm, sad, and poignant letter to her husband, asking him to take responsibility for the children while she goes off to deal with an important task. It reads like the kind of thing the real Saimdang might have written, as part of a very mature adult relationship with her spouse.

Then we're snapped back to reality and have to remember that this is "Saimdang: Light's Diary", a drama where every so often Lee Gyum pops out of nowhere with flowers for his lost lady love. The sheer corniness of this tragic love story really gets to me. I feel sorry for Lee Gyum's wife. I don't think we've ever actually seen her outside of that one wedding scene but still. Imagine how it must feel for your husband, even in an arranged marriage, to go after a taken woman like that.

The sheer ridiculousness of the giant conspiracy doesn't help. It would be nice if director Yoon Sang-ho could just pick a tone and stick to it for more than five minutes at a time. At least I don't get whiplash anymore, mostly because I'm so used to these ridiculous transitions that I never get too emotionally involved with any given scene in the first place. I just hope, however desperately for some consistency.

"Saimdang: Light's Diary" also manages the impressive task of making me regret wondering what happened to the framing device. Now, see, when the Royal Guard goes rummaging through people's belongings at random in Joseon, that's plausible. Going through the same trope in the modern day with Jeong-hak makes no sense, because he is a professor. Tenure does not give you the power to search through the homes of subordinates.

But then it's a headache trying to make any sense out of the academic storyline. You know what I've always wondered? How do museums and galleries authenticate their artwork anyway? Clearly some sort of process must be involved with that to insure whether or not we're looking at fakes. That would be interesting. But it comes as little surprise that "Saimdang: Light's Diary" instead decides to turn that plot point too into yet another elaborate conspiracy.