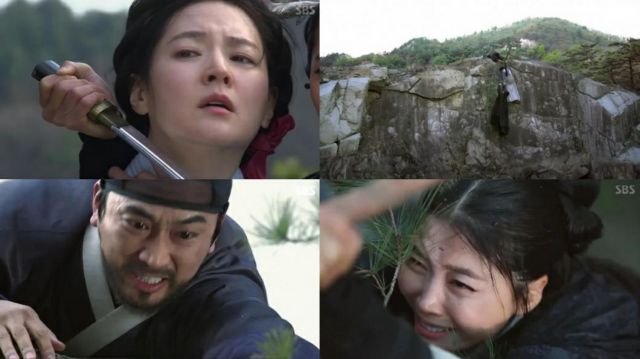 As Saimdang sets off on her quest to find a plot device, Lee Gyum finds himself in the thick of the conspiracy. King Jungjong's family history is discussed in greater detail. Then the enforcers of the conspiracy catch up with Saimdang and they are only saved by the chance intervention of some guy who apparently has a past relationship with the street urchins. Then we're treated to a group of other tangentially related characters fussing about clothes in a lighthearted way.

Laid out like this the plot to "Saimdang: Light's Diary" sounds almost Dickensian in scope. This lends some credence to the idea that the drama might not irritate me so much if it was about fictional characters rather than real ones with actual historical accomplishments. Bear in mind that even then, the sheer scale of elaborate coincidences necessary to make the story function are enough to make my eyes want to roll straight out of my head.

The drama is so overdone it's impossible to take seriously. Take the cliffhanger- not the end of episode moment, but that scene where the three principal characters are literally hanging off a cliff, apparently not having found any other more sensible way to resolve their differences. You know, even a love triangle would have been a digression from history, but it would have been a plausible one. How did we get here? How did anyone think this was a good idea?

The framing device is no excuse. Ji-yoon and Sang-hyeon and Hye-jeong are still hard at work restoring Lee Gyum's portrait of Saimdang at a nightclub and no I don't know why of all places they're doing this at a nightclub. Maybe it was actually explained at one point. It's hard to tell because the main part of the nightclub I can remember is from previous previews that showed Ji-yoon and Sang-hyeon dancing there and we do at least finally get to see that happen, contrived and bizarre though the reason ends up being.

So, did anything good happen this episode at all? Well, I thought the meta-joke Jeong-hak made about Saimdang was kind of funny. But see, the problem with that joke is, it reminds me that I pretty much know about as much about Saimdang now as I did at the beginning of this drama. It would be funny that most people only think of Saimdang in terms of her relationship to Korean currency except that we're really no different than they are.