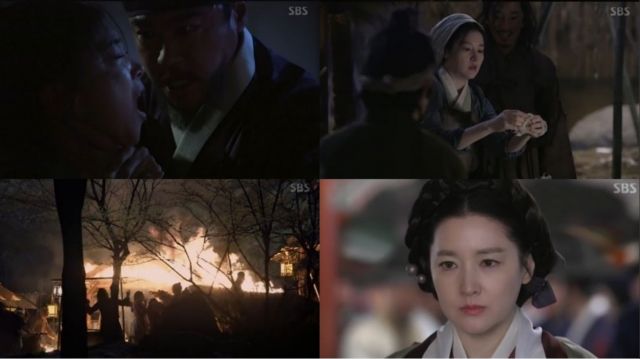 Director Yoon Sang-ho can throw all the pretty lighting and musical cues at Lee Gyum and Saimdang as he wants. But at the end of the day, a single look of genuine meaningful concern from Won-soo about Saimdang's safety has a lot more impact than anything Lee Gyum has done over the entire course of the drama. I really like Yoon Da-hoon. He's pretty much the only actor in "Saimdang: Light's Diary" who consistently comes off as believable and sympathetic, although it does help that his character is written somewhat realistically.

As far as realism goes, there's actually a fairly compelling plot going on in the middle here about the proper interpretation of Chinese characters. The ironic complexity is quite well-done. Even though the artifact in question is a set of instructions about how to make classical Goryeo style paper, which was obviously written by a Korean person, properly translating the piece back into spoken Korean requires quite a bit of classical Chinese knowledge.

That portion of the story may be somewhat difficult to grasp if you don't have at least a basic fundamental idea of how Chinese characters work. I do have a rudimentary understanding, at least enough to be surprised about how they're combined into new characters, and that made it easy to appreciate the efforts Saimdang and friends make trying to figure out how they're properly transliterated. Intepreting technical instructions is, after all, quite a different task compared to interpreting poetry.

But as is usually the case for "Saimdang: Light's Diary", for every step taken forward with something genuinely interesting, the rest of the story has to take two steps back in terms of outrageous stupidity. The big villainous plan this time involves a fire. Why this was supposed to work is unclear, considering that the competition everyone was preparing for only required a small quantity of proper Goryeo paper to illustrate proof of concept.

Then right as this is about to be explained, we're moved back to the present day and are treated to even more elaborate and stupid conspiracies regarding art theft. It was unclear to me why Ji-yoon and Sang-hyeon were trusting the transport to a driver they didn't know in the first place, considering all the nightclub related shenanigans they went through to hide the artwork in the first place. Although really, I might as well ask how anything is being authenticated since regulatory bodies are conspicuously absent here.