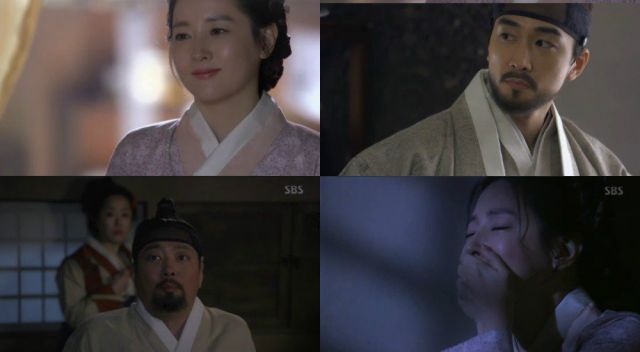 Apparently the production team has realized that they've made Won-soo too sympathetic, ruining what little chemistry Saimdang and Lee Gyum have. So naturally, "Saimdang: Light's Diary" fixes this by...having Won-soo start an affair with a daft idiot. You know, the real-life Won-soo knew he was marrying an unusually intelligent and well-educated woman. Given the standards of the time this could potentially make Won-soo an interesting character in his own right. Instead he's just a sitcom buffoon.

Treating Won-soo's affair like a massive betrayal is also a complete anachronism- sufficiently powerful married men in Joseon could and did take public consorts. It boosted social status, and helped insure the survival of at least one male heir. While not terribly politically correct, a storyline that takes this into account would at least be interesting, since for all her proto-feminist accomplishments the real Saimdang would have considered this state of affairs (ho ho) to be rather uncontroversial.

But no. As usual "Saimdang: Light's Diary" neatly bisects the world into two kinds of people- those who unconditionally love Saimdang as an angel sent from the heavens to relieve them of their misery, and those who hate her because they're total jerks. The sheer blatant one-dimensionality of the plot points in this drama is what really get to me. Saimdang has only just now seriously started painting and rather than get any idea of her creative process the production team just reduces this talent to a means of producing jealousy.

I started out this episode concerned that "Saimdang: Light's Diary" was going to do something ridiculous like have the Japanese pirates try to kidnap Saimdang and force her to paint for them. It's a little shocking that, having to endure the Won-soo affair storyline, I kind of wish they had actually done that. And it might still happen. Then I'll have to bite my tongue because as dumb as that would be, at least it's not the Won-soo affair plot.

As for the framing device, we learn that Jeong-hak is not quite the cartoonish villain he appears to be. That big theatrical display with the fire did serve a purpose. It was an improbable one to be sure, but sadly, not so much by the standards of "Saimdang: Light's Diary". As for Min-seok, he's uh, probably not dead? Based on what we've seen that doesn't really make sense, but this drama works by screenwriting logic, not actual logic.