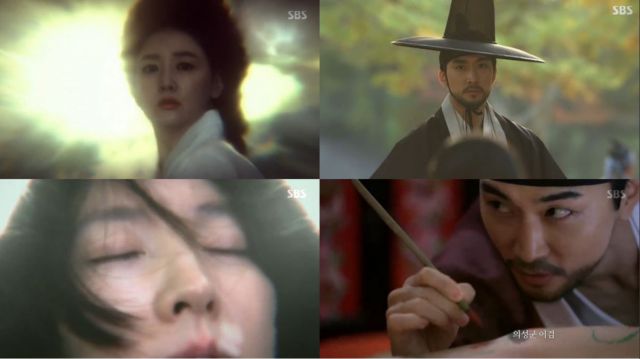 We start out with brief, generally boring academic politics. Thankfully "Saimdang: Light's Diary" quickly gives up on this exposition and it's right to what we're all waiting for- the introduction of Saimdang (played by Park Hye-soo). Of course, for now she's still just a kid. Saimdang is spunky, what with trying to climb walls, but the young woman is smarter than she looks. Saimdang has a keen eye for the arts that soon gets cultivated as she spends time with Lee Gyum.

The start of their relationship is typical meet cute stuff. Where "Saimdang: Light's Diary" gets interesting is when they start talking about nature and emotions and putting those thoughts into words. There's actually little to no talk of love here. Nature, as expressed in Saimdang's poetry, is an end to itself. The natural world is an inherently beautiful place, the subtle motions of which are easy to encapsulate in the spirit of the greater universe. Lee Gyum gets that, which is why they gop well together.

Consider Min-seok (played by Lee Hae-young-I), Ji-yoon's husband. He's a jerk of the increasingly passive variety. A brief moment of his acting like a husband should at the hospital is quickly undercut by his once again proving to have not even the slightest conception of what motivates Ji-yoon to get through life. I find it fascinating how clearly telegraphed Min-seok is as a bad person without the script having to resort to clear physical abuse.

That's the drama "Saimdang: Light's Diary" is shaping up to be- one about dramatic emotional pain. Which is a rarity, since emotional pain usually gets tossed into melodramas, since we tend to think of them as uncontrollable. "Saimdang: Light's Diary" itself makes impressive light of this by having Min-seok use that argument at one point to try and calm Ji-yoon down, genuinely oblivious as to how much of a massive disaster he's created for his undeserving family.

That's besides the more general mystery. Ji-yoon's friend and support staff Hye-jeong (played by Park Jun-myun) is hard at work uncovering the secrets of Saimdang's story. But then there's the fantasy sequences, where Ji-yoon starts seeing herself as Saimdang, and all sorts of further questions are raised. Whether the cause of these moments is hallucination or just stylistic interpretation on the part of the production team, I too am finding myself dran into Saimdang's story.