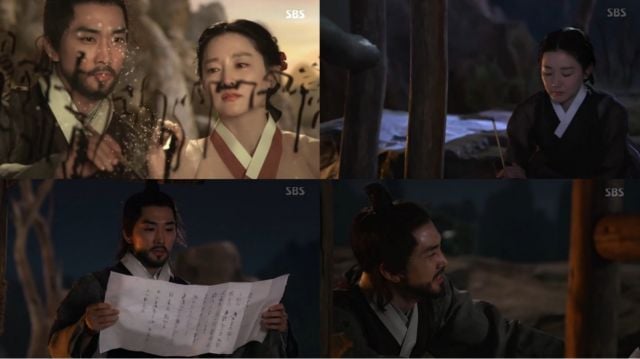 Try as I might it's surprisingly difficult to parse the motives of any of the antagonists in "Saimdang: Light's Diary". This is especially awkward since the drama is now at the climax and everyone's getting their comeuppance/unjust victory. Headmistress Choi is jealous. It's dumb but it makes sense. Everyone else? Chi-hyeon is evil for the sake of being evil. Won-soo hates his wife and apparently his children too. King Jungjong is...I don't know, suddenly not appreciative of art any more?

But then really, the answer to any given "why" is pretty simple. Because it's whatever outcome is specifically designed to make Saimdang the most perpetually miserable. I don't doubt that Saimdang's life had a lot of low points. Everyone's does. What specifically makes "Saimdang: Light's Diary" so frustrating is that it goes beyond the plausible and simply makes up horrible melodramatic nonsense for the sole purpose of inspiring us to pity Saimdang and everyone unfortunate enough to be in close proximity to her.

What was the production team thinking here? Why does Saimdang's desire to paint Mount Kumgang have to come from horrific pathos and tragedy? Why couldn't Saimdang paint Mount Kumgang because she likes painting and Mount Kumgang is a very beautiful landscape? "Saimdang: Light's Diary" is all the bad parts of "Jang Yeong-sil - Drama" with none of the good bits. At least in the latter drama we got to see Korea's most famous scientist do science every once in awhile in appropriate context.

More than its simple sheer badness, though, the repetiton in "Saimdang: Light's Diary" is what really gets to me. Chi-hyeon dies, and Headmistress Choi is finally brought to justice, not because what they're doing here is any worse or any different than anything they've done already, but because there are only four episodes left in the drama and the loose ends have to be tied up. I guess I should be thankful that they won't be interfering with the plot anymore.

I'm probably going to regret writing that, though, since now the only remaining conflict of any note is the tragedy of Saimdang having to live with her undeserving husband rather than Lee Gyum, the sensitive artist warrior beloved by the common people. I hate that I always have to write about that. First time I saw Lee Gyum, all I wanted to know was how the guy got to Italy, not how cool he was.