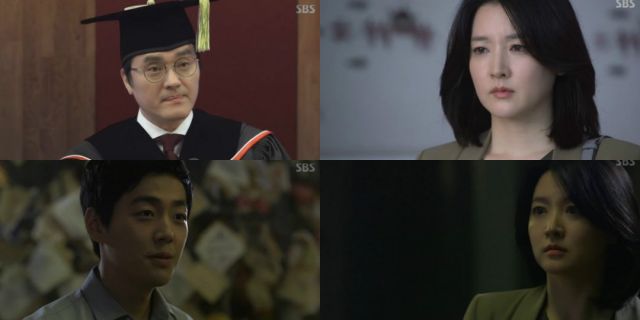 It's back to the framing device as Ji-yoon...pretty much gives up on any hope of recovering the painting and just goes on a road trip with her son. This road trip is rather geographically challenged. Ji-yoon's father lives in Pyeongtaek, yet the first place they end up going is Chuncheon, which is practically on the opposite side of the country. All while Ji-yoon is holding down a teaching job apparently.

That's more nitpicky than my usual criticisms of "Saimdang: Light's Diary" although in a way it's somewhat relieving. If the production team can't even keep track of basic local Korean geography, their inability to turn a coherent story out of a relatively ambitious project is somewhat more forgivable. Emphasis on the word "somewhat"- I don't have a clue whose idea it was to tap a team with no interest in art or academia to produce a story entirely centered around art and academia. But they're the real villain here.

Just as Ji-yoon is, somewhat incomprehensibly, not actually the real protagonist. No joke- everything important that happens this episode in terms of exposing Jeong-hak's shenanigans is not thanks to Ji-yoon, or even her sidekicks, but rather the mysterious man with the camera who has been following Ji-yoon around this entire time. Can anyone, anywhere, explain to me why this guy isn't the main character, when he is apparently far more competent and interesting than the actual principles here?

But thematically it does make sense, bizarre as it may sound, to have Ji-yoon randomly be rescued by a man, because Saimdang too has spent the entirity of "Saimdang: Light's Diary" being rescued by men while disproportionately violent run around smashing stuff to bits and generally because as comcially evil as possible. The relative boredom of this particular episode only highlights where all the action is. As did the lengthy recap at the start, lasting several minutes, that reminds us of all the drama's gorier details.

"Saimdang: Light's Diary" is long past the point where the ending could be interesting even from a morbid point of view. We know that Lee Gyum is going to be exiled to Italy, that Ji-yoon is going to witness, if not necessarily directly act in such a way to bring Jeong-hak down, and that Saimdang is going to be in basically the same place she's been the whole time- a victim. Who will die young, because in addition to being historically true, Saimdang's death will of course provide another opportunity for excessive melodrama.