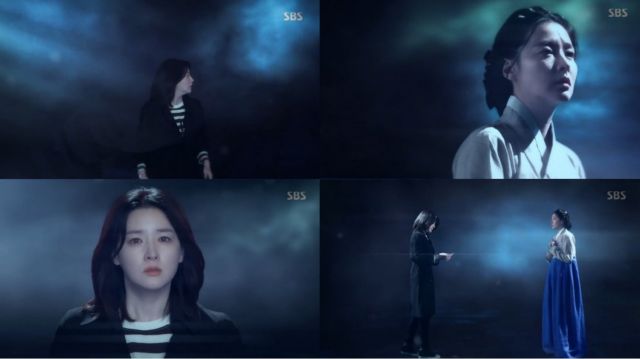 So it turns out Jeong-hak's thievery of Saimdang's Kumgang Mountain painting is easily detectable by anyone with proper training in classical art. This isn't exactly a surprise, considering that Sang-hyeon identified the errors in Jeong-hak's fake way back in the first episode and it was mainly hubris that prevented Jeong-hak from realizing the error himself. At the time, I was expecting the central conflict would be over Jeong-hak stubbornly refusing to acknowledge Sang-hyeon's argument even as Ji-yoon discovered the genuine painting.

That seems like an eternity ago. I certainly wasn't expecting that Jeong-hak would resort to using the power of his hired goons to simply beat up anyone who got in the way. Incidentally, everyone ends up going back to the nightclub. And even though Jeong-hak's goons were chasing Ji-yoon through a crowded area with countless witnesses, and nightclubs by design have physically intimidating guards in the front whose sole purpose is to control who goes in and out of the building, I'm sure that once again the goons somehow managed a clean getaway.

The sequence of events in Saimdang's timeline isn't much better. Everyone is still very, very sad because Lee Gyum is being made an example of. I've seen people jailed in South Korean historical dramas on some exceptionally petty excuses. This is because people with the right connections in these dramas like abusing them for political reasons. That "Saimdang: Light's Diary" somehow manages to make an artist the victim of a political conspiracy without giving him any political enemies is in some ways a crowning achievement of bad scriptwriting.

Then, we finally get to the big moment where Ji-yoon meets Saimdang. And rather than the classical artist giving Ji-yoon useful and relevant counsel on Ji-yoon's situation, we get the exact opposite. So "Saimdang: Light's Diary" is... a time travel drama with a causal loop paradox? Is Saimdang really so helpless that when Lee Gyum isn't available, she has to rely on advice from time travelers?

Even those flaws would be forgivable if the drama could manage a feat so minor as to make me care about what happens to Lee Gyum. But I really don't. While I've frequently lamented how "Saimdang: Light's Diary" has failed to explain the real Saimdang's achievements, it's only just now that I've noticed I don't have a clue why Lee Gyum is famous either. We see him wield the sword a lot more than the pen.