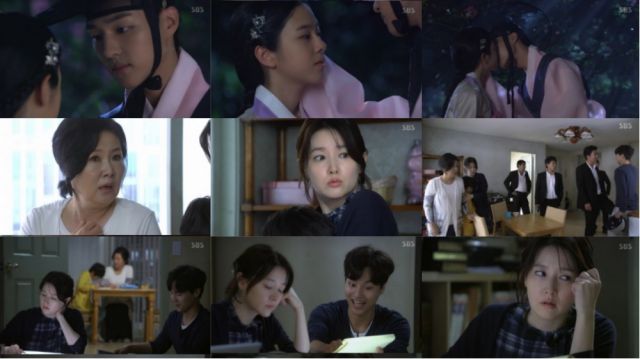 An extended flashback sums up the general mess of Ji-yoon's current situation, and why it has led to her having gazebo chats with Sang-hyeon (played by Yang Se-jong). Incidentally, Yang Se-jong also plays the young Lee Gyum in flashback, and once the recap is over with we are once again treated to the generally adorable romance between Lee Gyum and Saimdang. Oddly enough this storyline is no less sweet simply because we know it can't possibly end well.

And just when the cynicism is about to set in, that's when it's back to Ji-yoon's modern-day problems. I liked how technically even though Sang-hyeon is the cause of these problems, Ji-yoon is fairly sensibly able to restrain her agitation and focus it in more constructive directions. When Sang-hyeon does the whole heroic save the damsel in distress thing, it's actually very helpful in terms of character judgment, Sang-hyeon does not stir up disaster just for kicks and giggles. back in the first episode, he really was just very offended about proper authentication procedures.

By the time this episode moves into the third act, though, we're quite beyond social niceties as both Lee Gyum and Saimdang are forced to awkwardly acknowledge class conflict. Though no obvious immediate threats appear to thwart their union, it's nonetheless noteworthy how, obviously in love though these two may be, they also have a sense of larger dedicated purpose. Evidently Saimdang's heart was in the right place, however limited she may have been when it came to having the power to actually renact change.

...Maybe. I do find myself wondering just how much of "Saimdang: Light's Diary" is actually based on historical record versus being made up for dramatic embellishment. It does help, oddly enough, that Ji-yoon's generally awful husband fits into dramatic cliches much better than anyone in the historical half of the story. This works to bolster the drama's more universal themes of struggle and adversity, while always keeping in mind that Saimdang and Ji-yoon have very middle class problems.

This production choice is fairly refreshing, since it helps to keep everything that happens in context. However we try to dress her up in the modern day, Saimdang was always just an artist and a poet. They have far less influence on historical progress than they'd like us to think. But it's Saimdang's own very personal life story that makes her representive of the struggles of an entire nation. This gives the drama a lot of appropriate flair.