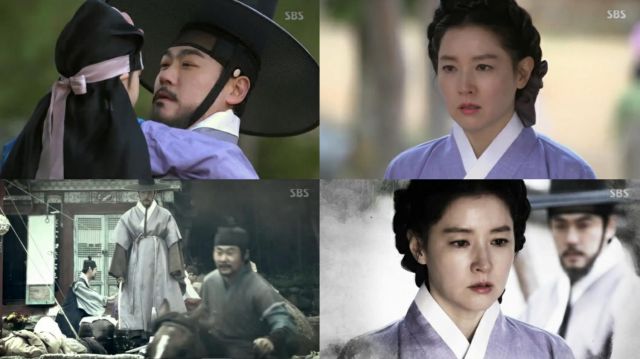 Dramatic romantic opening notwithstanding, "Saimdang: Light's Diary" continues with its dual stories. Lee Gyum tries to accomplish stuff at the governmental level, while Saimdang tries to maintain a basic standard of living at her home. Ah, this is...you know, one of the criticisms of putting Saimdang on Korean currency is that her role in Korean history has not been a terribly proactive one. I'm kind of baffled as to why "Saimdang: Light's Diary" is choosing to highlight this.

Because artistic composition is still a very much important part of Saimdang's life story, pushed as it is into the margins like this. So why is it that we're seeing more of Lee Gyum's accomplishments than we are of Saimdang's? The artist's colony is an interesting concept, especially if, as is stated here, people of all social classes were allowed to join. But it also doesn't really have anything to do with Saimdang directly, so it's a bit far off from Ji-yoon's research prompt.

Speaking of which, the framing device in "Saimdang: Light's Diary" becomes more and more irrelevant with each passing episode. Here it just boils down to Ji-yoon taking her son to the museum to admire this old artistic work, while doing precious little to discuss the origins of this art and why it's still relevant and beautiful. Where's all the wonderful academic research we were promised?

The main bright spot here is, of all characters, Won-soo. Yes, he's a bit of a dimwitted oaf and yes, everyone in the family dislikes him for good reason. But he does bring some much needed down-to-earth comic relief to the situation. While Saimdang and Lee Gyum are acting all swept in dramatics, Won-soo is there to remind us that everyone needs to eat. While this is admittedly somewhat at cross-purposes with "Saimdang: Light's Diary" supposedly being about art, Won-soo does at least bring something different to the usual clichés.

That much does appear to be my main continuing disappointment with this drama. All the right elements are sitting there in front of us, waiting to be utilized to tell an innovative story about how memorable and important a person Saimdang was. But it just isn't happening. The emphasis is in all the wrong places. There's no consistent arc for us to be moving toward. We still don't have the slightest clue how Lee Gyum ended up in Italy and the production team is in no hurry to give us a hint.