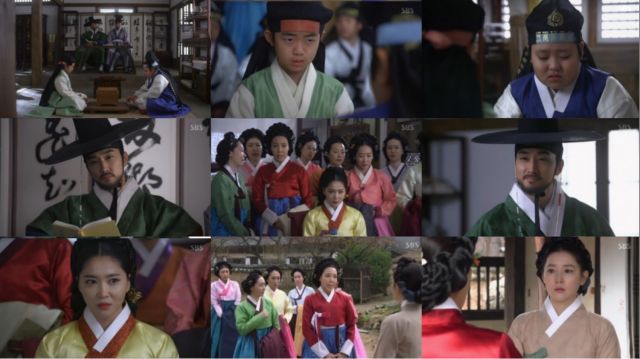 The two main genres at the forefront this episode are soap opera and parent teacher association meetings. I have to admit that the latter concept is rather...unique, in that I never in a million years expected that I would be reviewing a historical Korean drama that focused on parents talking to other parents and teachers about their children's academic performance. In context, though, it's more of the usual disappointments since Saimdang herself has, as usual, only an indirect role.

It does provide Headmistress Choi (played by Oh Yoon-ah) an actual avenue by which to pursue her villainous jealousy over Lee Gyum loving Saimdang more than her and yep, that's where the soap opera stuff comes in. These plot points consistently give "Saimdang: Light's Diary" a rather dirty gossipy feel. I honestly feel kind of bad for Headmistress Choi. Sure, she's a jerk, but we're learning all of this secondhand through the modern day framing device of Saimdang's diary. Who knows the extent to which any of this information is actually accurate.

Speaking of the framing device, all that really happens this time is that Ji-yoon gets into a fight with her mother-in-law as a consequence of her no good husband living in hiding and only communicating through cryptic spy methods. The obvious goofiness of all this is a problem I have noted before. But I also need to call attention to the issue of agency. Ji-yoon is a passive character much like Saimdang herself. She just reacts to external stimuli rather than being proactive in any way.

Compare Mrs. Gong (played by Park Jun-myun), whose methods for trying to improve her son's lot in life tend to involve negotiations. Granted a lot of these are just negotiations for street food but still. Incidentally this episode also continues the proud tradition "Saimdang: Light's Diary" has when it comes to weird, vaguely amusing scenes of no obvious purpose. Apparently Lee Gyum has made personal acquaintance with a band of jolly gangsters.

Park Jun-myun, you may recall, also plays forensic researcher Hye-jeong, who has been helping Ji-yoon with...whatever it is Ji-yoon is trying to do, I'm honestly not sure anymore. That's what really gets me about "Saimdang: Light's Diary". Try as I might I just can't figure out what the point is supposed to be. There could very well be an actual historical reference to everything that happens in this drama, it's just hard to tell because the whole project's so disjointed.