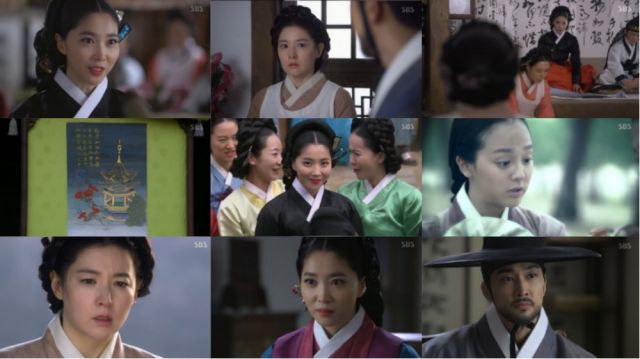 At this point "Saimdang: Light's Diary" has clearly decided that it wants to be a drama about Saimdang trying to find the best way to usher her son into eventual success. In any other drama this would at best be a third tier plot, so director Yoon Sang-ho livens up the proceedings by playing epic organ music while Saimdang's archnemesis Headmistress Choi tortures people. And no, this doesn't look any less goofy in execution than it does written down.

Oddly enough I was actually looking forward to academic politics back in the early episodes of "Saimdang: Light's Diary". But that was in terms of the modern day framing device, which involved research disputes between advanced degree holders. That alternate plotline, flawed though it may be, doesn't even make an appearance this episode. Instead, we're left in Saimdang's time, having to watch quibbling between overinvolved mothers obsessing over whose kid is going to get the best recommendation letter. Compared to Saimdang's own artwork, this story point is rather...bland.

It doesn't help that we once again do get scenes of Saimdang's creative process, but they're so brief as to feel like a total afterthought. Even worse that that is the extent to which Saimdang's character is constantly made a victim of past trauma, and how people seem to be out to get her for no good reason. You know, I'd really like to think that a woman of Saimdang's education, opportunity, and accomplishment would have had a decent amount of self-confidence and mutual social support.

Everything I've read about the historical person has implied, to me anyway, that Saimdang was the kind of person who didn't need to be told how awesome she was. Yet here we see her, decades into marriage with a kind of buffoon, struggling to make ends meet, begging for favors and forgetting simple errands. Maybe at some point Saimdang is going to impress us with success and perseverance, although that will probably feel unearned.

Remember "Queen Seon-deok", about another important female historical figure, which by necessity had to take liberties with history due to an incomplete record? That drama owned, because even though the title character spent most of her time struggling against greater powers, she also had frequent if small victories, and inspired others by example through sheer determination. Saimdang never does anything remotely like that. It's how episode after episode "Saimdang: Light's Diary" continues to disappoint.