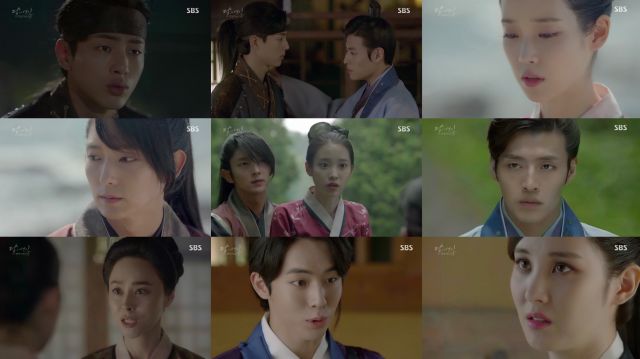 There's some good use of close-ups here as we can see Prince So's make-up is slowly wearing off. It's a good metaphor- Prince So is somewhat less vicious with Soo's influence, and it's unmistakable how the more we see of the scar, the more it seems like Prince So is turning back to rage and hatred. Even Prince So himself is surprisingly cognizant of just how scary he is, and how this can be off-putting to Soo.

Unfortunately director Kim Kyoo-tae was apparently so impressed with these close-ups that he decided that nearly the entire episode should just consist entirely of close-ups. Overuse of close-ups is an aesthetic crime to begin with, but it's especially frustrating in a drama like "Scarlet Heart: Ryeo" which boasts excellent costume and set design, that we rarely ever get to see because of all the stupid close-ups. Even the sword dance practice scene is largely obscured thanks to these questionable filming decisions.

I mean really, for huge swaths of this episode I was left wondering whether the motivation behind all these close-up shots was because for some bizarre reason director Kim Kyoo-tae couldn't get all the actors in the same room together. The drama's edited in such a way that it's never even all that clear what anyone is looking at. The way the close-ups prevent us from being able to see body language also substantially limits the range of the performances.

This much isn't the fault of the actors, at least. They manage to do pretty decently with what they have. Kang Ha-neul has some of the best scenes he's had since the drama started. Although it is somewhat disconcerting. Prince Soo may be the explicitly dangerous prince, but glimpses of Prince Wook here indicate that he has a dark side, too. It's just that Prince Wook is better at covering it up, since when the man's with Soo he can think of all sorts of lovely flowery words.

Soo herself remains kind of dumb, though. After all the dangerous experiences she's been through, Soo is still determined to see this bad situation through to the end, and it comes as little surprise that by dumb luck she's the one who pops up by accident in the latest complicated royal scheme. It's uncanny how even though she's allegedly the main character, Soo always ends up being important mainly through passivity. Better for the princes to save her, I guess.