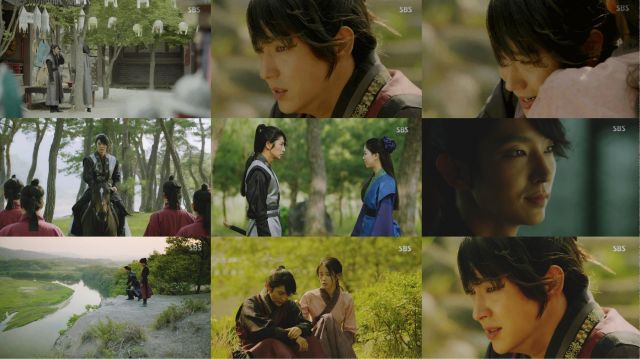 A wide-angle camera shot better explains the cliffhanger for the last episode and...apparently Woo-hee was nowhere near King Taejo? What's more, the monarch had other more immediately pressing problems in the whole "staying alive" department, so that leaves Woo-hee's entire storyline as being completely pointless with no pay-off. Even so, other characters have to devote energy to saving Woo-hee, because Soo likes her, even though we don't actually know how or why Woo-hee and Soo are friends.

The scripting in "Scarlet Heart: Ryeo" is...well, it's not terrible, I'll give it that much. But it really is jarring how it seems like half of every episode is directly related to serious dramatic payoff while the other half is just random filler involving characters with little to no influence on the main action. Bizarrely enough Soo, the alleged main character, also falls into that category. Observe how Soo is important here mainly because for whatever random reason, she's the servant who King Taejo tasks with the important mission.

King Taejo himself, in fact, is another such character. I honestly didn't have much reaction to his death because we really do know so very little about the man personality-wise. The late flashbacks, with sad Prince So thinking back to how important even the most meager approval from King Taejo was, could be read either as sympathetic or cruel. Prince So's dad was the most powerful man in Goryeo, and look at how broken down his poor son is.

Faulty logistical scripting is also a contributing factor to that. I couldn't figure out how Prince Yo managed to escape when last we saw him the guy was being held at swordpoint by a literal army. But then again, Prince Yo is yet another one of those characters who's important more because we think he's important than because he does anything noteworthy. More then actual personality traits, I remember Prince Yo chiefly for his excessive eyeliner.

This, too, being a usual consequence of the blasted camera work, which seems to go out of its way to make "Scarlet Heart: Ryeo" difficult to watch. When even the fight scenes involve close-up shots, that's when we have a problem. The worst of it is that bad camerawork really takes me out of the story, reminds me that I'm watching something that was filmed, and further makes it difficult to connect emotionally to the characters. It's all very irritating.