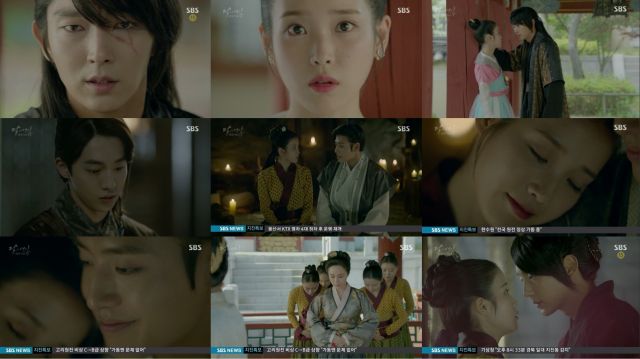 The soundtrack in "Scarlet Heart: Ryeo" is really anachronistic, to the point it even manages to overshadow Soo. I'm not saying everything has to be traditional Korean musical instruments all the time. It's just a little off-putting when we're watching a traditional Goryeo ritual with everyone acting like standard characters in a classical costume drama, but then a modern pop song shows up and all of a sudden the immersion is ruined.

It doesn't help that the Goryeo aspects of "Scarlet Heart: Ryeo" are overwhelmingly the most interesting ones. I'm fairly indifferent to the loveline between Soo and Prince Wook, but I am intrigued by Soon-deok's attempts to get closer to Prince Eun (played by Baekhyun). While Soon-deok is of course completely unsuccessful, it's fun watching her try. Although really, what did Prince Eun think they were going to do with the bird? Keep it as a pet?

And of course we can't forget  Prince So. Props to Lee Joon-gi. The man truly does seem determined to carry the dramatic weight of "Scarlet Heart: Ryeo" all by himself if necessary, and it's fortunate his role in the ceremony this episode is serious enough to grab a lot of attention. The final iteration of this scene also gives Soo something useful to do for once- although I'm skeptical that this was really a task that Soo and only Soo alone could have come up with. But I'm skeptical in general about the extent to which normal people actually cared about stuff like the divine right of kings.

The conflict still works overall because the important question is not whether other people care about Prince So's scar. It's that Prince So himself has a huge complex about it. Soo, partially because she doesn't really understand Goryeo all that well, only understands the issue with the scar on an abstract level. This simultaneously terrifies and intrigues Prince So. But this also works the other way around, as Soo only realizes at the end of the episode just how unavoidably ominous Prince So really is.

What makes "Scarlet Heart: Ryeo" irritating is that these good bits are always sprinkled throughout every episode- it's just that a lot of stuff is happening in between these scenes and in the background that feels rather pointless by comparison. At least the story is picking up. Now that Prince So has achieved the minimum level of self-confidence to be proactive, he can have a more dynamic role in the plot, for better or worse.