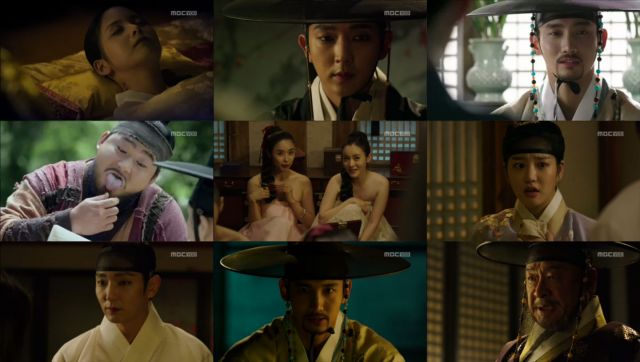 Yang-seon (played by Lee Yoo-bi) is a cross-dressing book merchant. It quickly becomes very obvious why that is- apparently even in the Joseon era, selling books required lots of borderline perverted gamesmanship. Yang-seon is completely stoked to find any source of new book material, no matter how obviously ridiculous. No, actually, the more ridiculous the better. That's what drags the clients in- the promise of preposterous sexy stories.

"Scholar Who Walks the Night" manages the nigh-inexplicable feat here of mocking the entire pop-fiction publishing industry, including its obsession with sexy romance and vampires, while "Scholar Who Walks the Night" is itself a sexy vampire romance. This episode had several moments where I just had to stare in astonishment at the extent to which the drama is making fun of itself. It's like the script is anticipating the ways people are most likely to mock the drama, and beating them to the punch.

Yang-seon is the perfect vehicle for this task, too, especially on the back of Lee Yoo-bi's incredibly energetic performance. Yang-seon has no self-awareness. She just loves her job too much to analyze it in depth, which gives her obsession with Seong-yeol quite a bit of sincerity. Yang-seon is a fangirl- one lucky enough to be in a position to constantly indulge in her passions while still technically being at work. This would be a good time to note that "Scholar Who Walks the Night" was adapted from a webtoon- one that I suspect strongly mirrors the author's own eccentricities, because how else would she come up with ideas this nutty?

The one downside of all of this is that if Yang-seon is going to insist on making a mockery of pop vampire romance that makes it just a tad difficult to treat Seong-yeol's much more serious nighttime adventures with much respect. Now that I've seen Lee Joon-gi as being the epitome of pretty boy vampire absurdity, it's that much harder to look at Seong-yeol in any other light just because Yang-seon isn't narrating anymore.

In fact, at this point it might be a genuine question of what these two have to do with each other at all. Obviously on the literal level Yang-seon needs old books, and as a book merchant, Yang-seon presumably has the ability to locate old books. But how to relate this with other absurdities, like the vampire conspiracies and government raids on the bawdyhouse? Goodness how strange it is to think that "Scholar Who Walks the Night" deals with both of these topics- strange, but entertaining nonetheless.