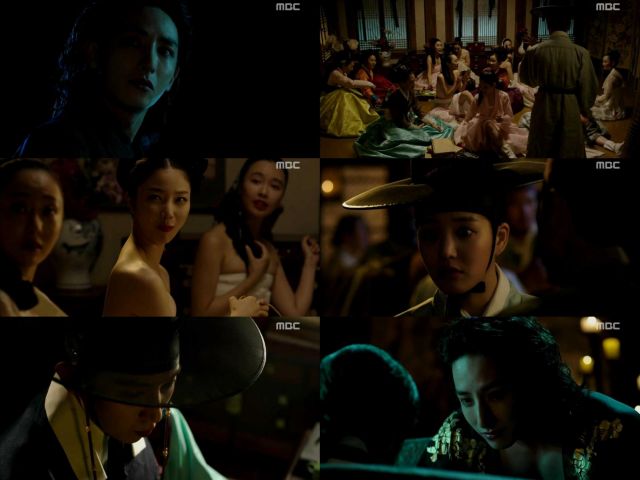 Poor Seong-yeol. I mean, I know it's a big genre convention that the brooding romantic vampire has to hate who he is, and regret the mistakes of the past, but still. Running into Myeong-hee does a number on Seong-yeol's brain here. It's a trauma only amplified by flashbacks which indicate that Seong-yeol didn't even really manage to knock Gwi out temporarily- at that point Gwi let Seong-yeol leave the throne room alive (or undead if you want to be technical) mainly out of pity.

The good news is that by the end of the episode we have a clear idea who the Myeong-hee look-alike is, which means that all the pieces have clearly been set up in terms of background. Yoon (played by Changmin) and Hyeon (played by Lee Hyun-woo) are the main mysterious points. Strictly speaking they're the main characters of the story, because they're the ones trying to unravel the mysterious political questions in the modern day. They don't even know really about how Seong-yeol and Jang-seon relate to any of this.

Neither does Jang-seon for that matter. If Seong-yeol is completely sick of his miserable existence, then Jang-seon represents bright cheery curiousity about the huge as-yet unknown world. In spite of the obvious dangers related to real vampires, Jang-seon ultimately decides to help Seong-yeol to a significant extent just for research purposes. It's not just vampires Jang-seon needs to learn about, though- it's the meaning of love.

This is one of the more appealing parts about Jang-seon's character, actually. Normally this kind of genre fiction presents younger women as having all the answers when it comes to love. But even though Jang-seon loves these stories to death she actually knows very little about what real love is. This gives a real edge to her character that prevents Jang-seon from turning into a shallow self-insert. Well, that and Lee Yoo-bi. She's quite good in the role.

For all the subtle strengths of "Scholar Who Walks the Night" I do have to admit that the story is moving rather slow- although this is more a function of the story's webtoon roots than it is a problem with the writing. Webtoons are focused much more on imagery rather than story, and even if Seong-yeol's brooding doesn't accomplish a whole lot it does give us plenty of opportunities to see Lee Joon-gi's pretty face crushed by sadness while Lee Soo-hyuk's pretty face acts all menacing. Well what were you expecting, it is a drama about vampires.