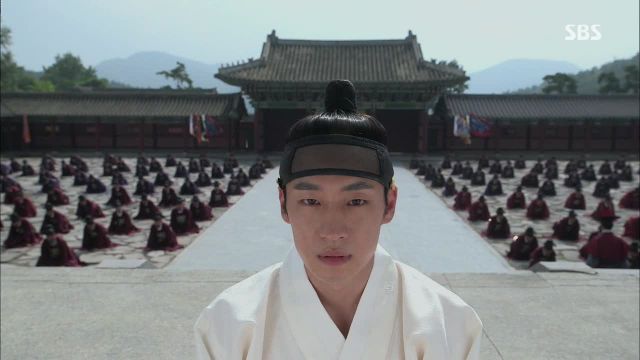 "Secret Door" is based on one of the most famous stories in Korean history: the story of Crown Prince Sado and his father, King Yeongjo. It is a tragic tale that has been re-created many times. The circumstances surrounding the lives and deaths of the father and son pair are shrouded in mystery despite multiple (differing) accounts of Sado's contemporaries. "Secret Door" is putting its own spin on the story, which thus far is exciting and fast-paced.

All the well-known figures in history have made their appearance, played by a remarkably strong cast. King Yeong-jo is portrayed by Han Suk-kyu with wonderful understatement. The  highly controversial Crown Prince Sado, known during his lifetime as Lee Seon is played by Lee Je-hoon who gives the dark prince life outside the annals of history. The ministers who keep the political cogs moving are all solid, seasoned names in Korean drama and cinema who are led by the stellar Kim Chang-wan as vicious Noron leader, Kim Taek. They help establish the massive web of people who took park in the chronicled story of Yeong-jo and Sado, as well as a few characters added to humanize people we can only know through history books.

Director Kim Hyeong-sik ("The Suspicious Housekeeper") and writer Yoon Seon-joo ("Hwangjin-i") throw the viewers into the world of Prince Lee Seon where political tensions are high, expectations weigh heavily on everyone's shoulders, and events move quickly in order to match the cunning of those who vie for power. A lot of liberty has been taken with the generally accepted personalities of Yeongjo and Sado, but major events remain true. It is unclear if "Secret Door" will gradually devolve Lee Seon into the crazy Sado that history left us, but we have twenty-three more episodes to find that out.

The trapping of the show are simply wonderful. The background music is intricate and well-crafted. The action is cleanly performed and filmed. The camera has a big role in explaining the passage of time and change of scene. Costumes and period-relevant artwork and locations are beautiful. A lot of effort went into this first episode. Although very fast-paced, it still managed to clearly impart all vital information while creating a high-tension, emotionally-driven story that will carry us through twenty-four episodes of a reimagined Crown Prince Sado's life and relationship with his father, King Yeong-jo.

There was also quite a bit of levity and humor that is not quite synonymous with the tragedy that Sado's life is known for. It was welcome and I hope to see it scattered throughout the show that will most certainly need it as Director Kim's and Writer Yoon's version of history unfolds. The portrayal of Lee Seon as a young, idealistic, inexperienced leader is real and endearing. It has also begun to reveal what molds Seon into a darker person, but he hasn't quite become the tragic figure history tells of him. Where the show chooses to take this young man will be the heart of the show, but for now, he has begun handsomely.