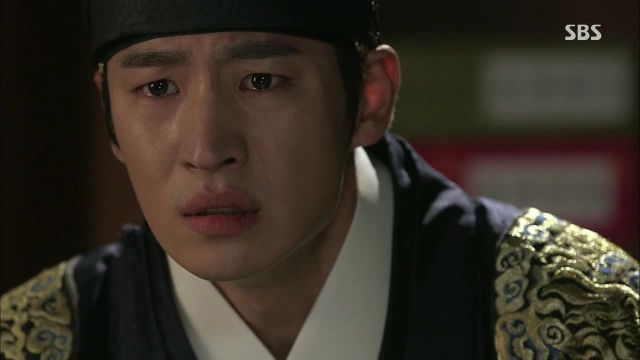 Seon has picked up some political savvy and realizes that in order to beat the powers that be, he has to play their game. He has not hurt an innocent to achieve his goal as his enemies would, but he does manipulate the system in a very satisfying retribution against the vile Minister Kim. It is now only a matter of time before this fight for the truth gets ugly, or rather, much uglier. It's already smeared with the blood of the innocent.

The document that incriminates King Yeongjo and a group of highly ranked Norons has come to Seon's attention as the possible motivator behind all the deviancy that has happened thus far. In his attempt to bring the truth to light and the lost lives to justice, he hunts it doggedly, which makes him a character that is easy to root for. "Secret Door" is making Seon into a tragic character by way of being a good man in a horrible situation. I wonder if he will show signs of his historical madness or if that will come in the latter half of the show with a few time skips. Regardless, Seon's gradual political awakening is the driving force behind "Secret Door" and Lee Je-hoon is a master at the helm.

One who is already savvy in the political ring is Seon's wife, Princess Hyegyeong. Despite the numerous emotional blows she receives, she is still stoic, determined, clever, and calculating. Her character, despite its severity, is winning. Park Eun-bin plays her with finesse that makes her human and relatable. Unfortunately, the other female lead, Ji-dam played by the exceptional Kim Yoo-jung, isn't as well-written. Yes, she keeps her wit and determination, but she is more of a plot tool to goad Seon and Hyegyeong than a strong character in and of herself. I hope they give her back her intrigue.

Another actor who is wasted is Kim Min-jong. His is the same situation as Kim Yoo-jung's: he is relegated to a role that is solely for instigating plot movement. There was ample opportunity to use him more, especially in scenes with Minister Park, but those opportunities were squandered. Minister Park, however, is a rich character who is thoughtfully portrayed by Lee Won-jong. He wants the government to be just, but will sacrifice justice to save the lives of those he cares for, which is in direct opposition (so far) with the prince's ardent search for the truth despite all costs.

Minister Kim as good a villain as any. He's clever, ruthless, and deceptively charming. He is like the sociopaths we often see on crime t.v. shows, which makes him terrifying as well. He gave up his son's life for his ambition. He is willing to manipulate anyone to make his desires come to fruition. When Seon thwarts him this episode, it is one of the most satisfying political battles in "Secret Door". It also plants a large seed of anticipation because a personality like Kim's won't allow himself to lose gracefully. It is akin to Yeongjo who has also suffered a blow because of Seon's newfound political prowess. Yeongjo's viability on the throne depends on Kim's mood for he is in possession of the secre document that could ruin him. Seon forced Yeongjo's hand against Kim, and that did not sit well with the man who is obsessed with his crown. Soon father and son will become true enemies, and that will be where the real heartbreak begins - as if there wasn't enough already.