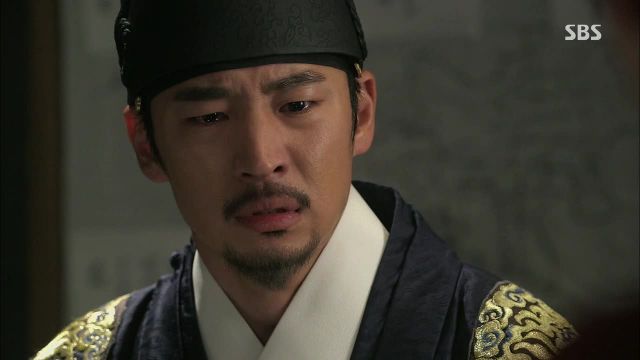 There are some hard lessons to learn in "Secret Door" for our young prince. His ideals have carried him this far, but the opposition has become near insurmountable unless he gives it. It is this point that steer all politicians onto gray moral ground. Without compromise, Seon will get no where. But that compromise comes at the expense of his people's rights. It's a hard lesson to learn.

Watching Seon learn to navigate the political minefield is the strongest point of the show save for his loaded interactions with his father. Seon wants good to win, evil to lose and happy endings to come at no cost to anyone. It's a beautiful ideal, but it's just that: an ideal. In the bloody world of Joseon politics, any win comes with a hefty price. There are just too many interested parties wishing to have their way. While Seon wins over hearts with his passion, it is not enough to change the centuries old traditions that guide the actions of those with power. The battles between Seon and his enemies are fraught with tension that is a driving force in "Secret Door".

Unfortunately, a lot of the episode was very draggy despite Seon's sadly steep political learning curve. There is much too much time spent on flashbacks and filming transition scenes. This time could've been cut down by half, but I have a feeling it was filler material. Part of this rambling effect is because of the now episodic nature of the writing. It's the same story over and over again: Seon moves the heart of a political official and that official sacrifices himself for the cause. It was fine one time, maybe two. But the repetition is just too much. "Secret Door" needs to regain the fast pace it boasted of in earlier episodes.

The women of the show have been short changed as of late. Both Ji-dam and Princess Hyegyeong are primarily reactionary characters. Hyegyeong has been relegated to a character who pines after a man she loves who doesn't love her in return. Ji-dam barely gets any screen time. She had no speaking lines at all in this episode.

King Yeongjo had some wonderful character beats, on the other hand. He has to wrestle with the fury that Seon provokes in him and his love for Seon as his child. Seon's decisions and actions go directly against Yeongjo's style of rule, which infuriate Yeongjo. At the same time, he admires his son's tenacity and ability to think for himself. What makes Yeongjo (and Seon) a tragic character is that he chooses politics over his son despite the love he has for the young prince.

While "Secret Door" has lost some of the spark and quick-pacing that made it engaging in the beginning, it is still entertaining. Now to bring back some of that verve it has lost.