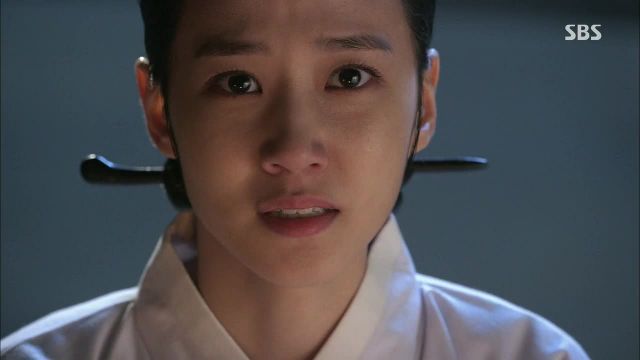 Thirst for power has consumed King Yeongjo's heart. He is such a fascinating and rich character. Despite the fact that he knows what he does is wrong and it goes against his conscience and his feelings for Seon, he does it anyway. He is willing to sacrifice even his own flesh and blood for the throne he gained through similar sacrifice.

It seems like "Secret Door" is trying to make a martyr of Seon when history paints a darker picture. It's an interesting take on the traditional description of insanity assigned to Crown Prince Sado. Here it is Yeongjo who is nearly mad with his craving for power. He justifies murder by spouting his plan to help his people. He pins the blame for any troubles caused by his ambition onto others. In this episode, he blames Minister Park for all the horrible events occurring when, in reality, he instigated throwing his son into prison to save his own hide. What makes Yeongjo so magnetic is the fact that he is both drunk with power to the point of losing control and incredibly aware of the precarious position he in and of the decisions he makes. This makes him a dangerous enemy of Prince Lee Seon who is still just learning to play the political game - all he has is his desire to do right by his allies and his people.

Inasmuch as the prince is young and naive, his teacher Minister Park is older, wiser, and still holds hope for a better Joseon. He is a picture of who the prince could be when older and crowned king after spending a lifetime of fighting corruption and getting nowhere. Park has done bad things for what he believes to be the greater good. He has preached his idealistic views for the political structure of Joseon for decades, but he has gotten nowhere. Watching him fight is sad, but also gives "Secret Door" heart. His goals mirror Seon's. They're full of bleak hope. Despite being stifled by corruption both Park and Seon fight for the innocent and against the devious. It paints a stark future for Seon who shows no signs of wavering in his ideals.

Then we have the princess who is a powerhouse in her own right. Despite the fact that she is a woman, she manages to use her wit to gain footing in the political playing field. Fear for Seon's life motivates her (as well as for her own position). She battles the king's concubine for power using her young son as leverage even though they did not appear in one scene together. The writing in this show is powerful. It is motherhood that affords her power along with her father's position in the Noron party and in the government. I like that her love for Seon is the primary motivator but she uses her cleverness to maneuver the murky waters of Joseon politics, not her emotions.

In contrast, Ji-dam is losing interest as a character. She is merely a pawn and I'm disappointed to see that she hasn't had much to do during the past few episodes. She's still spunky, but she is not nearly as engaging. The focus on the episode was on the complicated relationship between Seon, his father, his teacher and the evil Noron leader, Minister Kim. Still, the writing could've done better by Ji-dam. It is a small complaint when looking at the overall quality of "Secret Door", which is high.