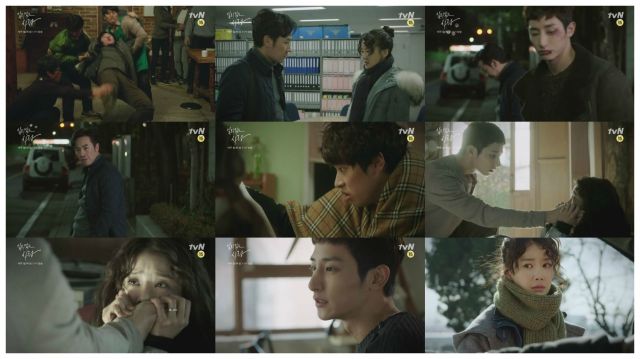 Il-ri's last-ditch effort to try and get Hee-tae to stop acting so heartless rather predictably fails. It fails in part because it's an obvious performance. Il-ri tries to show Hee-tae that she's sincere by directly and openly stating the facts of the situation to other people who can hold her to it. Yet to the very end Hee-tae stubbornly refuses to engage with Il-ri emotionally.

What's even stranger is his unwillingness to to face Seon-joo on these terms. In the entire apartment scene, it's pretty transparently obvious that she's coming on to him. Which is a little unsettling honestly- the guy's marriage just ended, is that really appropriate? Well, actually, it kind of is. Hee-tae isn't acting like a man who's angry or even all that upset about being betrayed. And his coy behavior around Seon-joo has the same unsettling, paternalistic air that he long ago shared with Il-ri.

"Sensible Love" has made another odd shift. Before it was Il-ri and Joon who seemed immature. Now, though, in the wake of the affair, they've clearly learned from their experiences. They both feel guilty- in Joon's case especially because of the big mess he's gotten Il-ri to it. Flashbacks to earlier moments in their relationship show a man coming to grips with empathy. This is the same Joon who looked into Il-ri's eyes while she was having an attack, and felt her terror. And it especially frightens Joon realizing that he's done this to her again.

Hee-tae, by contrast, is unwilling to accept that his actions have consequences. He realizes by the end that the abrupt, basically hostile situation with Il-ri has been deleterious to Hee-soo's health. Hee-tae then proceeds to go on about how the transition can be managed easily, when his sudden actions have thrown the entire family into violent shock. Hae-soo's rebuttal in particular came off rather appropriately.

And yes, it his his actions at this point, not Il-ri's. Frankly, Hee-tae is just looking for someone to blame. His reaction upon discovering the identity of the interloper is particularly unnecessarily harsh. Hee-tae has completely failed to grasp the fact that he's let an immature teenager ruin his marriage. Hee-tae's actions are infuriating- he's letting the moral failures of other people justify his taking harsh measures far more damaging than anything Il-ri did. It's another crowning moment of irony for "Sensible Love"- the man who Il-ri fell in love with because he was an adult is persistently refusing to act like one.