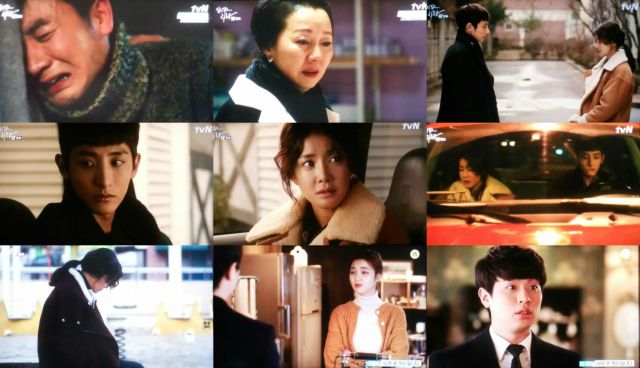 It's to the credit of the drama's sound direction that "Sensible Love" continues to feel deep and meaningful, even as the plot itself moves into increasingly melodramatic territory rather at odds with the genuine, complicated human emotion that's been explored so far. The use of silence really is quite excellent- take the sheer loneliness emphasized by the empty house. Why the house is empty isn't all that clear. It stands to reason that someone should have stayed behind.

Logical problems, though, are just an extension of the drama's current tendency to move toward unsatisfying resolutions. Hee-soo has been an extremely compelling character to date, and while her character exploration is true and heartbreaking, the way her fate is dealt with here is rather questionable. Mostly this is because Hee-soo has had surprisingly little actual screen time with her mother to date, as the love triangle has been taking up most of the actual energy.

It pains me somewhat to actually describe the main conflict of the drama as a love triangle, since that implies a standard first-lead or second-lead choice dynamic. But it's pretty unavoidable at this point that this is exactly where the drama is going. Following the consistent, general failure of the three leads to resolve their various emotional conflicts, all that's left is to wonder where Il-ri is going to go now that the main source of her recalcitrance is gone

Joon's decision, in any case, makes perfect sense. The situation finally managed to get so unearably silly from his perspective that Joon just decides to be rational and polite. Truthfully, Joon should have just taken this tact from the beginning. It was only leftover lingering emotional attachment that caused the man to act otherwise. It's nice to see Joon actually admit this, although the build-up was still very slight.

What's also become fairly clear as of late is that "Sensible Love" is just too long. Flashback is frequently employed here mainly to repeat plot points that have already been gone over quite frequently in recent episodes, sometimes even with the exact same flashbacks. This is just padding as "Sensible Love" tries to stumble toward an ending that I imagine will be unsatisfactory. This isn't necessarily a bad thing in and of itself- the drama's whole raison d'être has been about the emotional exploration of an inherently unfulfilling situation. Be that as it may, especially as of late, the material could have been handled better.