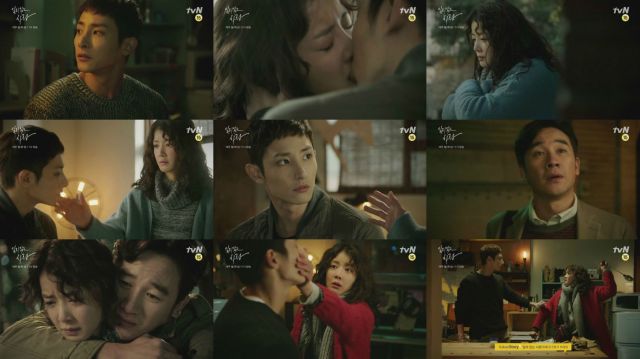 The divide between real life and what seems to be a fantasy continues to remain an ominous presence in the story. Take particular note of the dual scenes where Il-ri takes her problems to Hee-soo. In both cases, Hee-soo is just sort of perplexed at how ridiculous the situation sounds. It's an aspect of real-life relationships that a lot of people don't like discussing for the exact reason presented here. Il-ri feels less like a person undergoing genuine emotional strife and more like a child acting out a delusional fantasy.

And for what it's worth, she may well be right. The momentum has shifted such that Joon is now the one making advances, and it's easy to see why. The man really has nothing. There isn't anyone for him to talk to. Il-ri can at least sound out her problems to an actual person, even if that person can't actually respond. But all Joon can do is sit around in his workshop, wondering about things like when Il-ri's going to come back and get her stuff.

Hee-tae also takes a very curiously active role here. His meetings with Joon mimic Il-ri's interactions with the aloof young man. And it's hard to know what to make of all this. Is Hee-tae living in a fantasy world too? Or has he correctly ascertained the situation to be that Joon is desperately in need of friends even though the man is way too proud to ever admit that he's lonely? Joon is such an odd character in this respect- normally the aloof buff younger man archetype is fetishized every which way in affair stories, yet here Joon feels so weak.

It's surprising just how sympathetically every character comes off here. We know what this is all leading up to. We know that the situation is going to end badly, yet there isn't anyone here that can reasonable be called a villain. Maybe society is the villain? By demanding that emotional relationships be logically quantified in neatly defined ways, does the broader culture regarding romantic tropes encourage us to search for closure- even when in reality no such thing exists?

"Sensible Love" is just loaded with all sorts of broad, difficult philosophical questions like this, and five episodes in we're no closer to an answer. It's just more and more questions. Even an apparently innocuous subplot about a romance between a couple of tertiary characters proves rather unhelpful. If liking a person and not liking a person result in the exact same kind of behavior...what does anything even mean anymore? "Sensible Love" seems to be saying that love is an oxymoron- the irrational rationalized into rationality. Incomprehensible to be sure, but definitely accurate and true life.