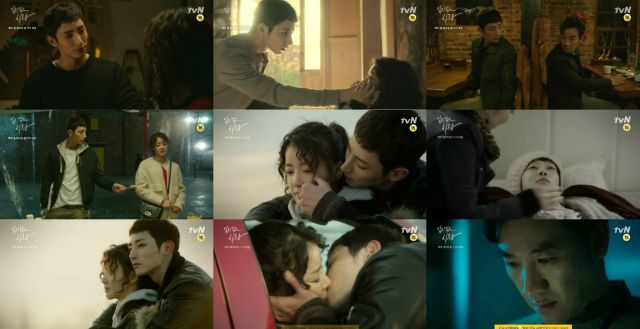 Pay note to the fact that, even though we're technically still in flashback mode, it's obvious that "Sensible Love" too is taking place at Christmastime. This would seem to imply that we're about to get out of flashback mode- except I'm not really sure what season it was when we started. At any event, given the major information that Hee-tae gets regarding his wife, it would seem like some major dramatic action is going to have to happen sooner or later.

Hopefully sooner. I've been pretty patient with "Sensible Love" so far but this episode really does stretch the limits of the attention span. It's mostly just the same material we've seen before, except building up to a greater extreme. Joon has become more aloof, rude, and generally unlikable, and Il-ri has become more needy and desiring of approval from him. Especially considering what ultimately spurs Joon to act here, it's hard to see this affair sympathetically. Which is probably part of the point.

Consider the opening scenes here. They're mostly just explanations of dreams, and in this case it's actually Hee-soo that draws sharp contrast to the way Il-ri is overthinking what happiness means. Il-ri's thought process is almost totally abstract. By contrast, Hee-soo's imaginative fantasy, while banal, is incredibly easy to visualize. For an invalid like her, there really isn't anything that exists which could be more amazing and wonderful than just being able to eat food like a normal person.

Also pay attention to what doesn't happen in Hee-soo's fantasy- not a single person speaks to her, or even acknowledges that Hee-soo is in the room, and Hee-soo herself doesn't even care. The portrayal of her character from the beginning has consistently been that of an independent woman, and Choi Yeo-jin does excellent work establishing that independence means obtaining satisfaction from whatever she can get. Even if in this case it's just imagining a normal dinner.

While this makes for interesting material, "Sensible Love" is definitely still wobbling a bit when we take into account the fact that the main interesting character right now is the one who is quite literally incapable of doing anything. Hee-soo comes off so well here mainly because she actually knows exactly what she wants. By contrast, whatever Joon and Il-ri are hoping to obtain through this affair, it's hard to seriously entertain the possibility that they're actaully going to get it.