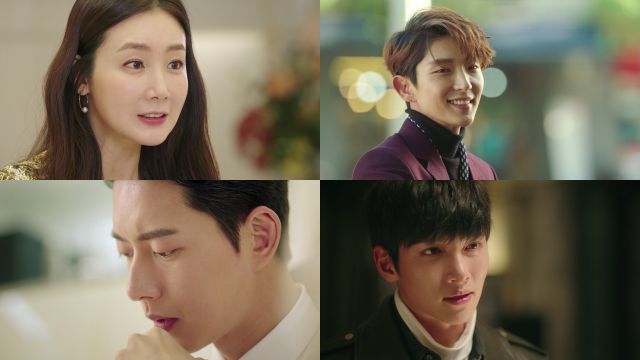 Soo-jin (played by Lee Cho-hee) works at the Lotte Duty Free store and laments having hit her twenty-fifth birthday without ever having received a first kiss. Then Choi Ji-woo pops up with a magical solution to Soo-jin's dilemma. This ends up involving the seven male models who represent the Lotte Duty Free Store- Lee Joon-gi, Park Hae-jin, and Ji Chang-wook feature in this set of episodes. Kai, Ok Taecyeon, Lee Jong-suk, and Lee Min-ho will appear later on. For contractual reasons, no doubt.

...Yes, if you were wondering why seven of South Korea's most famous male stars are appearing in an apparently random web-drama, that's why. Advertising purposes. At minimum this is almost certainly why "Seven First Kisses" comes complete with both English and Chinese subtitles. And really, who could blame them? Why bother appearing in a generic commercial when you can instead just do an exaggerated self-parodying ten minute genre drama?

The stories in "Seven First Kisses" are highly condensed and highly goofy. Director Jeong Jeong-hwa compresses the plotlines of entire dramas into small chunks that perfectly encapsulate the appeal of Korean cultural brand products worldwide. You see, there is a handsome or even pretty man. He is very manly and assertive, yet also kind and gentle, who pursues you with single-minded determination no matter what manner of preposterous obstacle lies in his way.

Lee Joon-gi does not deal with very many obstacles, though, which is fine by me since his dramas usually have horrific backstories. He's just rich, but with that emotional void in his heart that comes from never talking to his childhood crush. Park Hae-jin plays closer to type as a stiff man with little to no emotional variance who is nonetheless attractive because, uh, he takes everything so seriously I guess. Ji Chang-wook, as expected, does spy thriller action romance.

But more than any of them I like Lee Cho-hee as a leading lady. She's just so...earnest. Soo-jin can barely contain her fangirlish glee over the prospect of all these handsome men paying so much explicit attention to her. She's passive mainly out of the fear that something will go horribly wrong in the case of explicit forward movement. This is true even when (as is the case in the Ji Chang-wook segment) Soo-jin finds that going out on the offensive can be a lot of fun. "Seven First Kisses" may be pure wish fulfillment. In the end though, aren't all dramas, really?